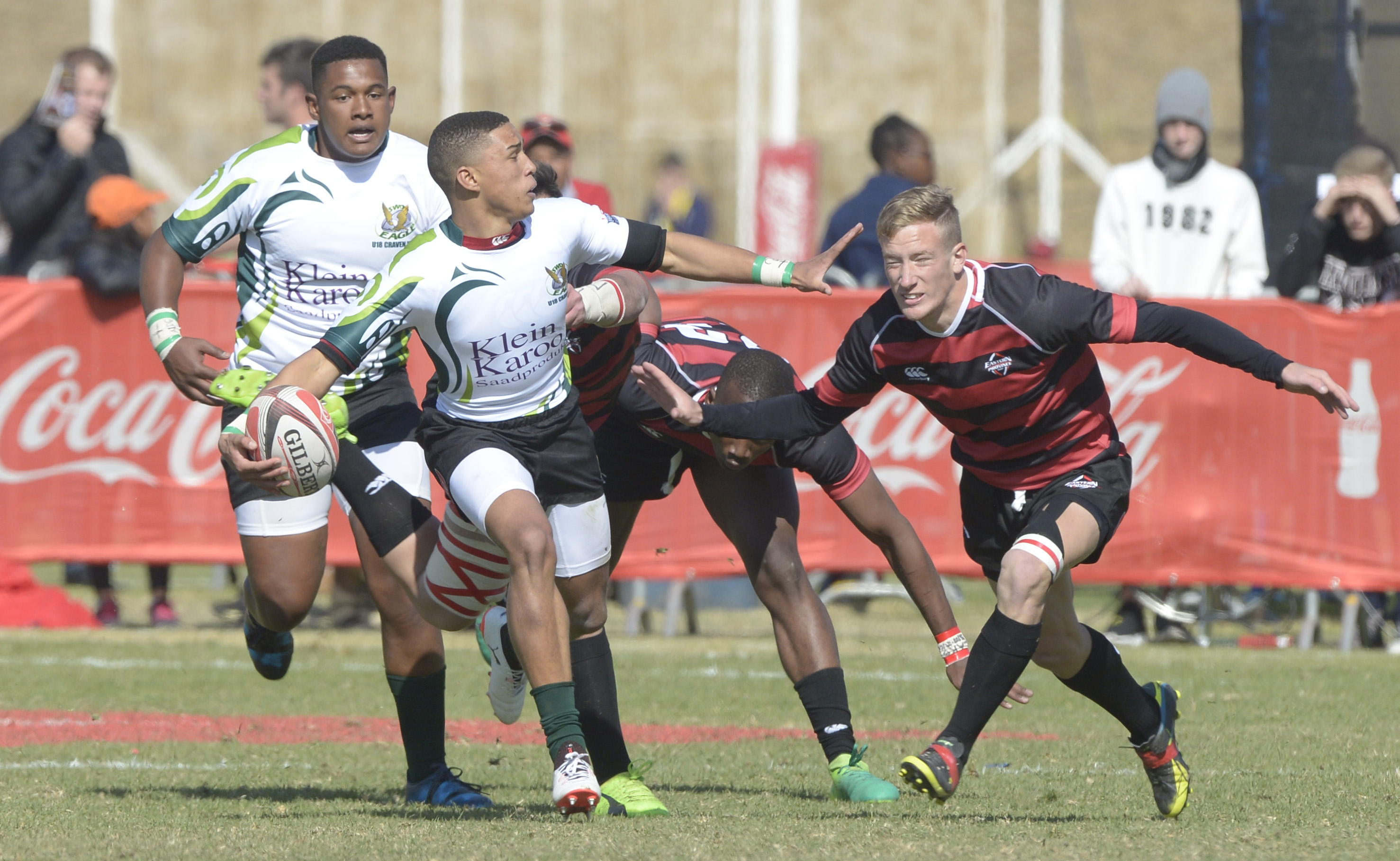 Day of big scores in the U18 Youth Weeks

The U18 Coca-Cola Craven Week and Coca-Cola Academy Week tournaments continued to entertain at St Stithians College in Johannesburg on Tuesday, with big victories dominating an action-packed day’s play.

The Sharks registered an impressive 53-33 victory against the Blue Bulls, while Namibia overpowered the Valke 52-36, the Leopards outplayed Old Mutual Zimbabwe 72-17 and GWK Griquas defeated Eastern Province CD 42-20 in the U18 Coca-Cola Craven Week.

There were, however, a few close encounters in both tournaments, with SWD defeating Eastern Province 27-22 in the flagship tournament, while Pumas CD pipped Namibia 16-15, the Blue Bulls beat the Free State 26-23 and the Pumas defeated the Bidvest Waltons Golden Lions 23-22 in the Coca-Cola Academy Week.

Outside of the results, it was a notable day in the U18 Coca-Cola Craven Week as female referee Aimee Barrett-Theron became the first woman to take charge of a match in the tournament.

SWD held off a strong challenge from Eastern Province for a 27-22 victory, with their prop Dian Bleuler scoring a brace for his team. The team’s packs were closely matched, but the talented SWD back line handed them the edge to outscore the Port Elizabeth team four tries to three after taking a 19-10 lead at the break.

The Sharks, meanwhile, used their solid foundation up-front to dominate the first half against the Blue Bulls, which paved the way for their six tries and an encouraging 38-7 halftime lead. The Blue Bulls fought back strongly in the second half and closed the gap to 38-28 as the Sharks reduced to 14 men for a dangerous charge into a ruck. The coastal side, however, stuck to their game plan to retain possession and earned the rewards as they two more tries to their tally and a penalty goal, which ensured that the Pretoria side’s four second-half tries were insufficient to push them into the lead. The match was particularly special for Sharks scrumhalf Sanele Nohamba who scored a try, a penalty goal and five conversions.

Namibia staged a strong comeback against the Valke in the opening match of the day from 19-0 down to register a rewarding 52-36 victory in their first match of the tournament. The Namibian forwards laid a solid foundation for the team as they dominated the scrums, while the side did well to spot the gaps in the defence and take advantage of them, with center Gerswin Mouton earning a hat-trick. The Valke, in turn, started the match strongly and scored three back-to-back tries, but the Namibians tightened up their defense and limited them to only two more for the match.

The Leopards delivered a solid performance all around against Old Mutual Zimbabwe, which saw them run riot on the attack for a 72-17 win. The first half was competitive as the Potchefstroom side took a 20-7 lead, but they broke loose in the second half and ran circles around the defense to finish the match with 11 Tries. Fullback Bertru Jones three tries, while flyhalf Hanru Van Rooyen scored two tries, seven conversions and a penalty goal. Despite this, Old Mutual Zimbabwe refused to give up and forced their way over the try line twice late in the match.

GWK Griquas’ ability to maintain their structure on the attack throughout their clash against Eastern Province CD and their constant pressure paid off as they secured a 40-20 victory. The Kimberley side built up an encouraging 25-8 halftime lead and they picked up where they left off after the break to run in a total of six tries, while they defended with intent to keep the Eastern Cape side down to three.

The Bidvest Waltons Golden Lions outplayed Old Mutual Zimbabwe completely as they ran in 10 tries for a 62-14 victory after leading 36-0 lead at the break. The home team’s flyhalf Tristan Oosthuizen was in fine form as he slotted over six conversions and scored a try for a personal total of 17 points.

The Valke Platteland delivered an equally effective performance against Border CD as they forced their way upfield with pick-and-goes and spread the ball wide wisely, which saw them cross the tryline eight times for a 51-12 victory. They led 22-0 at the break and then lifted the tempo to take control of the match, while their effective defence allowed the Eastern Cape side to score only tries.

The SA LSEN (Learners with Special Education Needs) team retained possession and produced a solid attacking performance against the Tshepa Trading Griffons CD to outscore the opposition eight tries to two. The SA LSEN team had a strong start and led 38-17 at the break, which set them up for the victory despite a much tighter second half.

The clash between Namibia and Pumas CD was gripping as the teams gave everything, resulting in the local side registering a narrow 16-15 victory. Such was the closeness of the game, Pumas CD led 13-10 at halftime as each side scored two tries while Pumas CD added two penalty goals. The only points scored in the second half was a try by Namibia and a penalty goal by Pumas CD, which proved to be enough to seal the win.

The Blue Bulls, meanwhile, overturned a 13-10 halftime deficit against the Free State to register a narrow 26-23 victory as they outscored the Bloemfontein side four tries to two. A solid performance by Free State flyhalf Alex-Zander Du Plessis, meanwhile, kept them in the match as his try, two conversions and three penalty goals earned him 18 points. His heroics, however, were not enough in the end.

In a fantastic finale to the day’s play the Pumas slotted over a penalty goal on the stroke of fulltime to defeat the Bidvest Waltons Golden Lions 23-22 in a gripping match. The hosts led 10-7 at the break, but the Pumas’ two converted tries and three penalty goals were sufficient to cancel out the home team’s four tries.