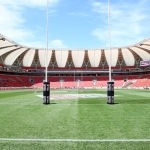 The decision to promote the EP Kings from first division Currie Cup to Premier Division has once again been delayed, after the matter was withdrawn from the Special General Meeting in Cape Town this morning.

EPRU President, Cheeky Watson said that the decision had been withdrawn after no consensus could be reached on the matter, and it was resubmitted to the Games and Policies Committee to come up with a viable solution to concerns that had been raised.

“Of course we are extremely disappointed that this matter has still not been resolved, but we are happy that it has not been completely withdrawn,” said Watson.

EP Rugby CEO, Charl Crous, said the further delays significantly impacted on the ability of the Kings to roll out various initiatives, secure sponsors as well as contract players.

“Of course we are extremely disappointed in the fact that the no decision was reached today, but we will not let this hurdle break our stride. We will continue preparing for next year and will be doing everything in our power to keep top flight rugby in the region,” he said.