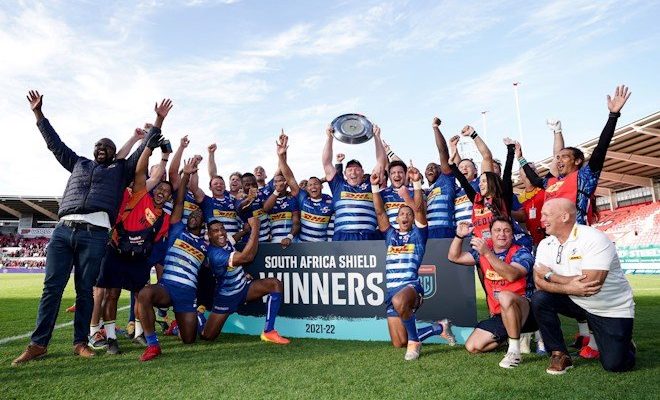 Being crowned the South African Shield winners in the Vodacom United Rugby Championship has liberated the elated DHL Stormers from a dark era in their history.

DHL Stormers coach John Dobson, in expressing the squad’s relief at getting the last-minute win against Scarlets that ensured the Stormers top spot in the SA Shield, dedicated the league season’s silverware to the people of the Western Cape.

“Winning the SA Shield gave us a sense of massive relief that we’ve restored some faith and pride in the jersey,” Dobson told the Vodacom United Rugby Championship. “It means a lot to us, probably more than to some other teams given the trials and tribulations we’ve been through here.”

“Western Province is a very proud union with a remarkable history,” said Dobson. “We represent this amazing group of people in the Western Cape across demographics including race, religion and working class. It’s been tough for them to see what’s been going on here and giving them something to smile about was so important to us.”

One win from their first five matches, including defeats against Benetton, Dragons and the Emirates Lions, made for gloomy headlines in Cape Town.

But Dobson rallied his troops, some of whom had made financial sacrifices to stay with the team, and the DHL Stormers went on a winning spree in which they lost just one of their last 13 matches.

“I’m really pleased for the players who stuck with us and believed in the project – there were big names, like Steven Kitshoff and Frans Malherbe, Scarra Ntubeni, Salmaan Moerat, and Damian Willemse who turned down massive offers from elsewhere, and then some of the lesser known guys who stuck with us when they had other offers.’

While Dobson is pleased the DHL Stormers’ story has taken a sharp turn for the better, the SA champions are determined to end this chapter with pages of exciting Play-Offs prose.