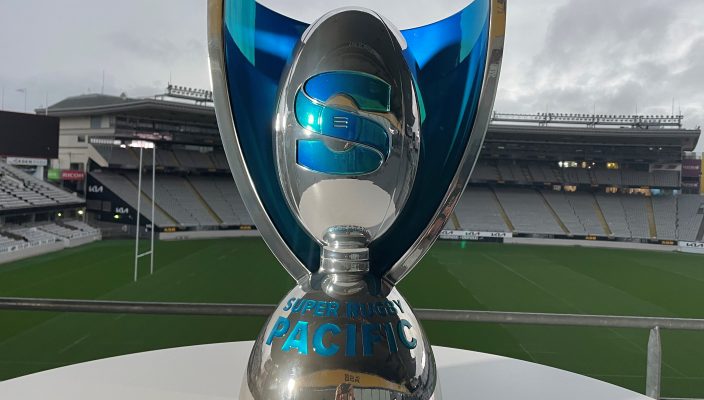 The quest to lift the inaugural DHL Super Rugby Pacific title just got real for the eight quarterfinalists with the newly minted and unique trophy prize unveiled on Sky’s The Breakdown for the first time.

The 54cm tall DHL Super Rugby Pacific is the result of about 1000 hours of 3D printing, believed to be a first for an international professional rugby tournament.

A metallic gloss finish is the result of a chrome dipping process, while the Pacific-blue cloak which wraps around the Super Rugby Pacific logo embossed ball is representative of a Pacific Ocean wave reflecting the entry of Moana Pasifika and the Fijian Drua to the competition for the first time in 2022.

New Zealand artist Dave Burke, a spokesperson for the design team, said they had based the concept on the power and beauty of the Pacific Ocean with the idea of capturing an element that encompassed all 12 teams.

“We kept coming back to the powerful metaphor of the Pacific Ocean that unifies, connects, and brings us all together. We couldn’t go past that. Symbolically the ocean is powerful, awe-inspiring, has immense depth and is uncompromising. We saw comparisons to the aspirations of the competition and the ways teams play.

“The colours developed through the logo, inspired by the dynamic colours, mood, and tones of the Pacific Ocean, were integrated into parts of the trophy to give it a modern and fresh look and feel. The teal, blue and aqua hues shimmer and reflect light like the sun’s rays shining off the ocean. As you move around or look at the trophy from different angles the colours change and create a glistening effect.”

The new trophy debuted on Sky’s The Breakdown show last night and was with former Blues and Chiefs fullback Mils Muliaina, a Super Rugby winner with the Blues in 2003, on the roof of Eden Park this morning where he reminisced about his own quest to win the trophy. Tomorrow it will be shipped to Australia by New Zealand competition partner DHL and will be side-line for the Brumbies v Hurricanes quarterfinal in Canberra.

There have been four previous trophies contested since Super Rugby kicked off in 1996 and the 2022 DHL Super Rugby Pacific trophy will be the first awarded since the competition was halted early in the 2020 season due to COVID-19.

In 2020 New Zealand and Australian clubs contested Super Rugby Aotearoa and Super Rugby AU tournaments in their respective markets, while 2021 saw those formats repeated and a quick-fire Super Rugby Trans-Tasman tournament tacked on the end of the season.

“Coaches, players, and fans have been chasing Super Rugby glory for the past 26 years and the eight teams in the finals series this season all want to add their chapter to the history of the competition and have their club’s name etched onto the base of the new DHL Super Rugby Pacific trophy.

“We have seen the huge emotional and physical investment all 12 teams have put into the first year of the DHL Super Rugby Pacific format, but only one captain will be able to lift the new trophy above their head at full time after the final in three weeks’ time. It’s going to be a great finish to the season.”