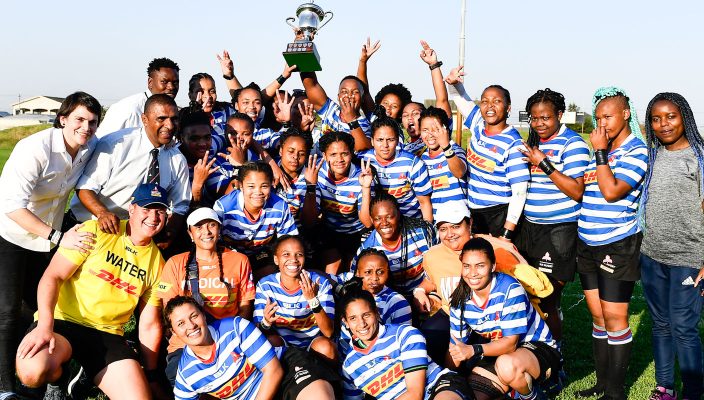 The Capetonians had to fight back three times during the match to stay in contention after a strong start by Border, which saw the visitors lead 17-10 at the break. Both sides scored six tries, but two in quick succession late in the second half proved decisive for the champions.

Star winger, Kimico Manuel dotted down in the opening minutes to hand DHL WP an early lead, but a converted try by Border had them back in the lead five minutes later.

Border scored their second try just after the first water break midway through the first half, with Mophy Ngwevu (centre) finishing off some good work by the forwards.

The Border forwards were really strong when in possession, with good bursts and short passes allowing good interplay amongst their strong ball-carriers.

DHL WP, on the other hand, had some silky running by their backs to thank for their score board relevance and it was Manual who again ghosted past a number of Border defenders to score her team’s second try after half an hour of play.

Border scored their third try of the first half just before the break, with Nosi Gada (winger) again benefitting from some strong play upfront.

The second half was equally entertaining. The home side drew level thanks to a Vuyo Maqholo try, with the DHL WP fullback running a good line off a strong break by Shaunique Hess (centre).

Border took the lead again though, this time after Unam Tose (scrumhalf) sniped through and put their replacement-winger, Akhona Dotwana, in space.

That 22-17 lead was soon overturned by a converted try from WP, before Border again took the lead with a try. Trailing 24-29, the home side struck twice in quick succession.

First DHL WP scrumhalf Felicia Jacobs scored after a great break, and when Hess opened the Border defence shortly afterwards with a break on the counter-attack, Zindiswa Xozwe (lock) was at hand to score under the sticks.

The home side’s lead jumped to 38-27 and with time running out, Tose got a second. But the DHL WP defence held out in the last frantic minutes to claim glory.

In the end, a try by Golden Lions replacement flanker Ntabi Sejamoholo clinched victory for the team from Johannesburg, by 30-25 after the scores were tied at the end of regulation time, and then again after 20 minutes of added time.

Golden Lions centre Piwokuhle Nyanda scored the opening two tries for her team as they raced into an early 10-0 lead, only for SWD winger Nicolene Barendse to score a brace herself and put her side into a 12-10 lead.
The second half saw more see-saw rugby.

Nyanda scored two more tries to increase her tally to four for the match, while SWD replied with a five pointer by Faith Gosling (wing) and a penalty by Siphenathi Yeko (flyhalf) to draw level again.

The Golden Lions thought they won it with three minutes left, when Nobuhle Tshabalala (winger) scored in the corner, but SWD had one more play left and Patricia Korkey got the equaliser.

Yeko’s conversion went wide, as well as a penalty attempt, forcing the sides into extra time. Twenty minutes later, it was still 25-all and Sejamoholo had the final say during sudden death.