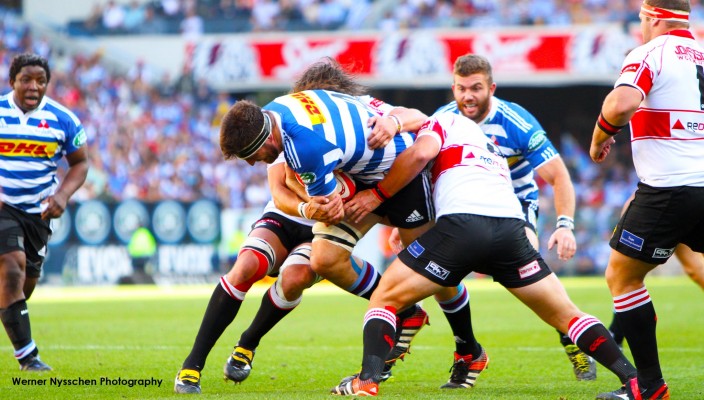 A 24-man DHL Western Province squad will leave Cape Town for London on Thursday, as the 2014 Absa Currie Cup champions get set to take on top English club Saracens in the Sanlam Private Investments Challenge this coming weekend.

DHL WP won their second Absa Currie Cup title in three years less than two weeks ago and they are now preparing to face up to last season’s European Cup and Premiership runners-up on their home turf at Allianz Park in North London on Sunday.

Squad captain Juan de Jongh and forward Michael Rhodes are currently on tour in the United Kingdom with the Barbarians and will join up with their teammates in London later this week, but Springbok tourists Nizaam Carr and Seabelo Senatla are currently abroad with the senior national squad and thus not available for this trip.

Another name missing from the touring group is fleet-footed fullback Cheslin Kolbe. Kolbe is being rested as part of an agreement with SA Rugby, which will see him represent his country at two upcoming IRB Sevens tournaments – in Dubai and Port Elizabeth in early December – before rejoining the DHL Stormers for a full pre-season campaign ahead of the 2015 Vodacom Super Rugby season.

Looking ahead to his team’s departure, DHL WP coach Allister Coetzee told www.wprugby.com: “This really is an exciting opportunity for WP Rugby, to take the DHL Western Province brand to London and for our players to experience northern hemisphere weather conditions at this time of the year, different law interpretations and, of course, to go up against different (overseas) opposition.

“It’s the perfect way to end off a good year for DHL Western Province and we’re all looking forward to Sunday’s match against a very good Saracens team, which, over the past few seasons, has consistently been one of the top performing outfits in England and Europe.”

The DHL Western Province matchday squad for Sunday’s encounter will be announced on Friday (November 7).