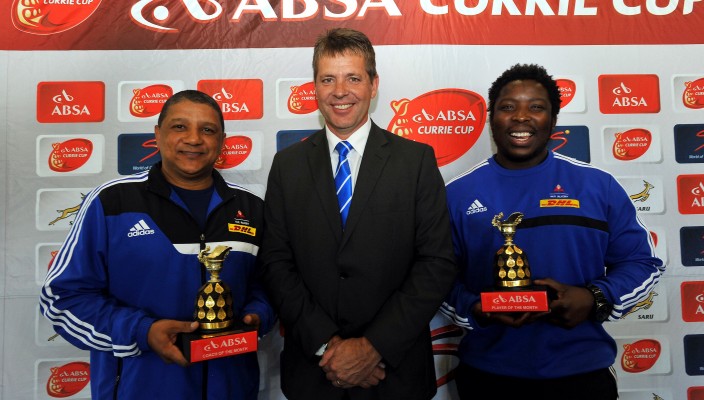 Coetzee’s team has been the epitome of consistency and has led his side to an unbeaten run after nine rounds and keeping them focused on defending their 2012 Absa Currie Cup title.

MTN Golden Lions coach Johan Ackermann was in a close second place behind Coetzee with his side featuring among the front-runners in the competition.

Ntubeni has been one of the standout players this season with his relentless work ethic making him an important part in the Western Province machinery. The 22-year-old hooker is growing in stature and is continuing to make an impression in the competition.

Both winners walked away with R10,000 each, courtesy of the tournament sponsor Absa.

MTN Golden Lions flank Jaco Kriel and utility back Marnitz Boshoff were tied for second place. It is the second time Boshoff has been nominated for Absa Currie Cup Player of the Month award, while Kriel has increasingly caught the eye in the competition making valuable contributions for the Lions.

Absa has been a proud sponsor of the Absa Currie Cup for the past 28 years.

The Absa Currie Cup Coach and Player of the Month competitions are designed to acknowledge and reward coaches for their outstanding leadership and players for their consistency and for notably contributing to the overall performance of their teams. The monthly winners were chosen by a media panel consisting of respected journalists and commentators.