Did you know Springboks Rugby Facts? 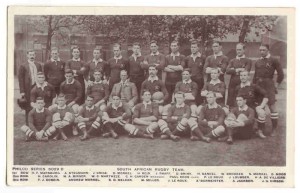 Please email us any other Springbok or International Rugby facts you have to media@rugby15.co.za

The information above is subject to change as some of the Springbok players still playing and old records could be broken by the time you read this article, please comment below should any information be outdated.

Please also correct us if any facts above does not correspond with your hard copies, or if you have any other Springbok facts you would like to share with us, mail to media@15.co.za