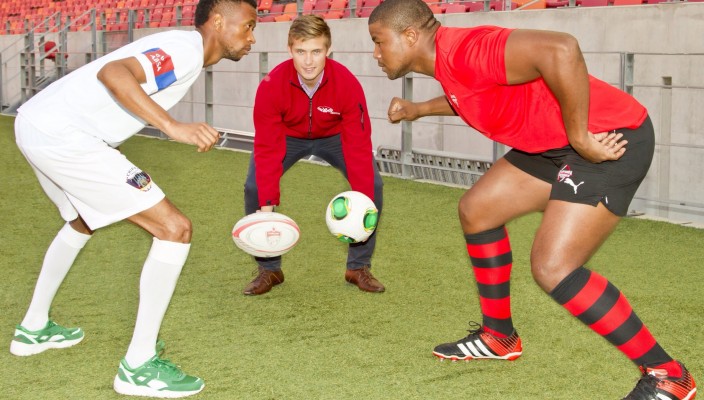 May 6 • General News, Vodacom Cup • 2787 Views • No Comments on DOUBLE DECKER DELIGHT FOR SPORTS FANS THIS WEEKEND AT NMB STADIUM

Nelson Mandela Bay residents and visitors to the friendly city will be spoilt for choice with a double decker dose of major sport events this coming weekend.

According to Chantal Du Pisani, CEO of Access Management, operator of the Nelson Mandela Bay Stadium, a capacity crowd is expected for the weekend’s upcoming rugby and soccer matches.

On Friday, 8 May, Nelson Mandela Bay Stadium hosts the Sharks XV for a game against EP Kings in the Vodacom Cup, while the Chippa United Chilli Boys take on Kaizer Chiefs in the final match of the ABSA PSL Soccer League on Saturday, 9 May.

Mandela Bay last year drew a staggering crowd of 25 000 spectators to the Chippa/Chiefs clash, while the last EP Kings and Sharks match drew a large crowd of rugby fans in July 2014.

“Last month, Chilli Boys recorded their first win of the year after beating Moroka Swallows 1-0, thanks to a winning goal by Edward Manqele,” she said.

“Equally impressive was the EP Kings’ recent Vodacom Cup performance at the Stadium, against Boland. There is no doubt in my mind that both teams will deliver a fiery performance.

“Fans shouldn’t wait until the last minute to buy their tickets to this sporting showpiece. We are working tirelessly behind the scenes to offer spectators value for money and an unforgettable event experience,” added Du Pisani.

“The Nelson Mandela Bay Stadium is the first to have secured anchor tenants for both major South African sporting codes, rugby and soccer – also a first for a South African 2010 FIFA World Cup stadium.

“The city’s investment in a multi-purpose stadium is reaping rewards for both rugby and soccer lovers, and more generally for sports and recreation in the city. The impact of these events on the local economy cannot be overlooked. We are relying on the community to back both events this weekend. The games promise to be exciting and have been priced affordably so all can enjoy,” she said.

Earlier this month the Premier Soccer League and sponsor Nedbank announced that the Nelson Mandela Bay Stadium will also host the 2014/15 Nedbank Cup final between Mamelodi Sundowns and Ajax Cape Town, on 16 May.

Tickets for both matches are available at participating Post Office, Post Net and Ticketpro outlets as well as the Nelson Mandela Bay Stadium ticket office. For more ticketing information fans can visit www.ticketpro.co.za.