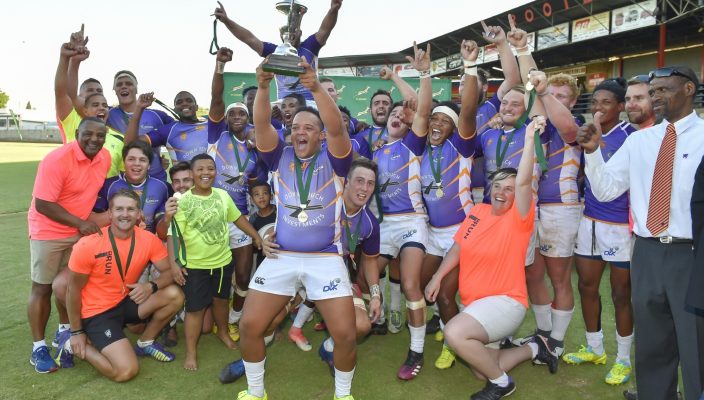 The Down Touch Griffons claimed their third consecutive SA Rugby Under-20 Provincial Championship crown in Middelburg on Friday afternoon when they defeated they iCOLLEGE Pumas by 53-6 in the final.

The visitors scored nine unanswered tries in an impressive showing, with two tries in the last three minutes of the first half and another shortly after the restart crushing the spirits of the home side. The men from Mpumalanga never recovered from that, but credit to them, never stopped trying.

The Down Touch Griffons scored an early mauling try to show their intent, with flanker Carl Wijburg taking the ball over the line. Scrumhalf Ethan Williams converted from a tight angle to set the tone for the match, as the Welkom side never surrendered the lead again.

The home side consolidated their efforts though and held on to the ball for a good spell in the first half. Flyhalf Chrizaan Strauss kicked two penalty goals in this phase to cut the lead to one point.

Smooth handling by the visiting backs though saw them exploit some space and Sean van Vuuren used his power to score the second try of the match, extending the Down Touch Griffons’ lead.

The iCOLLEGE Pumas held their own every time their pack of forwards had the ball, but battled to find the scoring pass. It was the men from the Northern Free State rather, in the 37th minute of the first half, who scored in quick succession.

Their pack drove well from an attacking lineout and when moved to the outside, winger Granwill Matthys raced through. Williams converted to give them a 19-6 lead.

It was the big boys upfront who created their fourth as well as Williams scored following a power scrum by his pack.

The second half was more of the same. Matthys scored early following a blind side break by Williams to extend the lead to more than 20 points.

The iCOLLEGE Pumas rallied well, attacked with intent and held good field position at times, but when Matthys scored a third after more slick handling, it was all over bar the shouting.

A strong break by Gift Dlamini resulted in a try for hooker Duke Jantjies, the seventh from the champions. Replacement-flanker Jason Roux added an eighth before centre Lubabalo Mteyise’s five pointer just before the final whistle confirmed the visitors’ dominance.