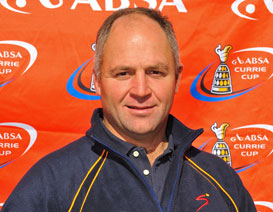 The Cheetahs are hoping that referee Jonathan Kaplan rewards the stronger scrum in Friday’s Super 14 battle against the Bulls. Cheetahs coach Naka Drotské is of the view that teams with more scrumming power are often penalised and plans to have a chat with Kaplan about the issue.

“I will definitely discuss the scrums with him. I feel the stronger scrum should get the advantage,” said Drotské.

“Sometimes referees penalise the stronger scrum, which is not right. If it is one of your strengths, the referee should not protect the other team.”

The Free Staters were one of the strongest scrumming teams in last year’s Currie Cup and Drotské makes no secret of the fact that it will also be a launch pad for them in the Super 14.

“Scrums are a major part of our game plan and we want to take the Bulls on physically,” he said.

The Free State Cheetahs even dominated this aspect of the Currie Cup final, which they lost 24-36 against the Blue Bulls.

Wian du Preez (loosehead prop) and Adriaan Strauss (hooker) represented the Springboks on their European tour at the end of last year, while WP Nel (tighthead) played for the Barbarians at Twickenham.

Du Preez joined Irish team Munster after the Bok tour and played against some of the best players in European rugby.

Furthermore, Coenie Oosthuizen will be burning to get on the field to play his way into the team.

Bulls loosehead prop Gurthrö Steenkamp will be keen to show that he still has something to offer after his scrumming humiliation on the Bok tour.

The Cheetahs expect the return of Springbok hooker Gary Botha from Harlequins to strengthen the Bulls’ front row, but they are not worried.

“He can make a difference because he was overseas and there is a lot of emphasis on scrumming there. He will bring their front row stability,” said Cheetahs scrum coach Os du Randt.