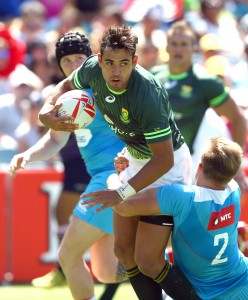 Springbok Sevens coach, Neil Powell, called on Chris Dry to join his for the HSBC Singapore Sevens tournament, to be played on Saturday and Sunday, in place of the injured Philip Snyman.

Snyman took a knock during the Blitzboks’ devastating semi-final defeat in Hong Kong and although he was cleared to play following the necessary protocols, team management decided to rather play safe and rest the forward, who played in his 35th tournament last weekend.

“There is no need to risk Philip,” said Powell. “Player welfare will always come first and Philip is an important player for us. We have a willing and able replacement in Chris, who will bring massive experience and ability to the team, so the call was made with that in mind.”

Dry is an experienced campaigner. He last played in the Vancouver Sevens in March, where he became only the third South African to reach 50 HSBC World Rugby Sevens Series tournaments.

“It is never nice to replace an injured team mate, so I feel for Philip. I missed the boys, so will be keen to go and contribute in our effort to win in Singapore,” Dry said.

The Springboks Sevens team will play Scotland, Russia and Kenya in pool C of the event.

The Blitzboks pool fixtures are (all SA times)”