Du Preez back to lead Bulls against Premier XV 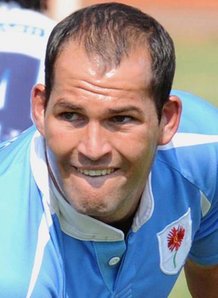 Vodacom Bulls scrumhalf, Fourie du Preez, will captain the Bulls side that will play a Premier’s XV in Nelspruit on February 5th.

With regular captain, Victor Matfield, ruled out due to a neck strain, coach Frans Ludeke, handed over the armband to vice captain Du Preez for the clash.

Wynand Olivier, Bjorn Basson, Du Preez, Danie Roussouw, Gary Botha and  Gurthrö Steenkamp, who all either missed the November international tour due to injury or picked up injuries on that tour, have all been included.

Basson will also make his debut for the Bulls after being signed from Griquas.

Stephan Dippenaar is the sole survivor from the starting team that lost to the Kings in Port Elizabeth last weekend.

The Vodacom Bulls team to play a Premier XV in Nelspuit’s Mbombela  Stadium on Saturday February 5th at 18h00 is:

Werner Kruger has been given the weekend off due to personal reasons.