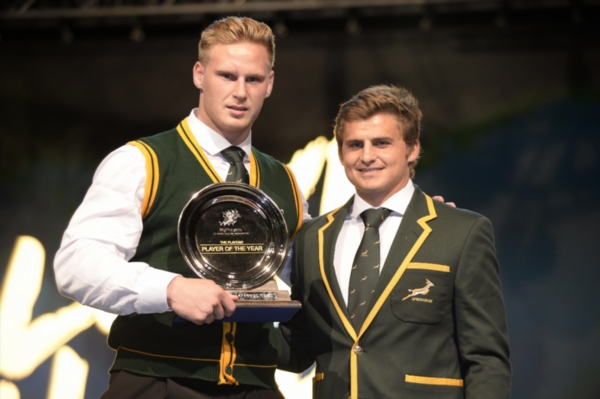 Pieter-Steph du Toit on Monday became the second Springbok lock in two seasons to be named as SA Rugby’s Player of the Year at a glittering awards ceremony at the Gallagher Conference Centre in Midrand.

The 24-year-old Du Toit follows in the footsteps of Lood de Jager, who walked away with the Award for the 2015 season, on a night where no fewer than eight of the winners are aged 25 or younger. The average age of all the players who won awards is 22.7 years.

The Springbok and DHL Stormers lock fought off strong challenges for the top award from his middle row partner Eben Etzebeth, and a trio of Boks from the Emirates Lions, Ruan Combrinck, Jaco Kriel and Warren Whiteley.

The Golden Lions however did do exceptionally well at the Awards, with a total of five awards heading back to Emirates Airline Park in Johannesburg.

The prestigious Players’ Player of the Year Award, presented by MyPlayers and voted for by the players themselves, went to Jean-Luc du Preez of the Cell C Sharks, who was on Saturday included in the Springbok tour squad for the Barbarians match in London early next month.

SA Rugby, for the first time this year, rewarded one of their member unions with a Best Development Award, which went to the Blue Bulls Rugby Union.

“To see so many young players step up and make their mark certainly bodes well for the future and I would like to congratulate all the winners, as well as those who were nominated,” said Mr Mark Alexander, Acting President of SA Rugby.

“Many of the players who won awards this year, will thrill us for many years to come and I’m certainly excited to see what the future holds for them and South African rugby in its entirety.

“It was a challenging year for South African rugby in many respects, but there were still a lot of wonderful achievements worth celebrating and all the players who won awards tonight, fully deserve to walk away with the spoils.”

The award winners are (followed by nominees in alphabetical order):