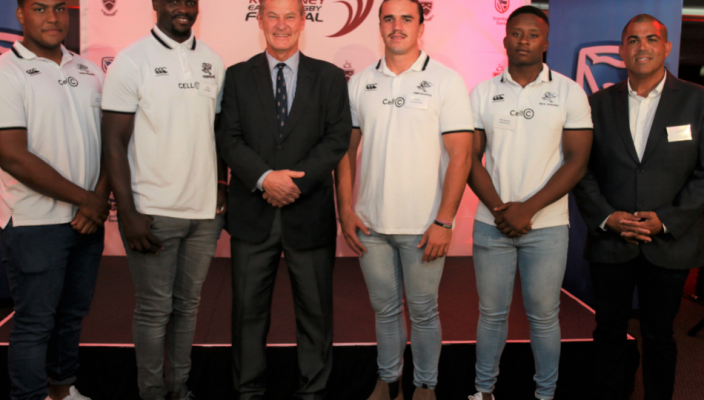 The launch of the 13th edition of the Standard Bank Kearsney Easter Rugby Festival last night (Wednesday 19th) was attended by lovers of the game across the spectrum, from current and former Springbok and Sharks rugby players, to coaches, administrators, rugby journalists and sponsors.

Traditionally the three play days of the festival, held over the Easter long weekend, attract strong teams from across the country, offering an exciting mix of playing styles – and 2020 promises to be no different.

They will be joined by the perennially strong Eastern Cape outfits of Selborne College (East London) and Hoërskool Framesby (Port Elizabeth); as well as HTS Drostdy from the Boland; Hoërskool Noord-Kaap from Kimberley, Hoërskool Dr EG Jansen (Boksburg in Gauteng) and HTS Middelburg (Mpumalanga).

Selborne College will bring their special brand of rugby, which they have displayed each year since the inaugural 2008 edition of Kearsney’s festival. Glenwood and Dr EG Jansen have both played at 10 festivals. Spectators will be delighted to see Westville back, having last played at the festival in 2015. The other local team, DHS, has played at four previous festivals, including the last two.

“I appeal to all schools to work towards positive relationships between players and between schools – use rugby to do this. We cannot allow the sport of rugby to be used as a mechanism for division. Role models for schoolboys are rare these days; and sport offers a wonderful opportunity to develop relationships between schools, with educators taking the lead as role models.”

He said two years ago the Springboks hadn’t been given much chance of success at the 2019 World Cup, but coach Rassie Erasmus, captain Siya Kolisi and others stood up and won the trophy, uniting communities and the country in a euphoria unseen for many years.

“Whatever challenges are facing us, let’s be courageous, let’s even swim against the current to be ‘that guy, that woman’ who makes a positive impact on those around us, on our schools, between our schools and in our communities,” Van den Aardweg said.

Endorsing the festival, Etienne Fynn, managing director of the Sharks Academy, said the Kearsney Easter Rugby Festival has consistently showcased some of the top schoolboy rugby talent that South Africa has to offer.

“The games are invariably well-matched and tight, which is indicative of the thought placed in inviting schools which will ensure competitive fixtures at the festival. Add to this the splendid surroundings and faultless organisation, the end product is simply superb,” he said.

Fynn, a former Bok tight-head prop, said the number of players currently representing the Sharks who have participated in the festival was proof of how the Sharks and Sharks Academy have benefitted from the festival.

“We look forward to again witnessing the pure passion on display and trust that the games continue to be played without fear of expression,” Fynn said.

Considered to be one of the most prestigious and well-organised schools’ rugby festivals in South Africa, teams travel with families and supporters to enjoy top schoolboy rugby and a family-friendly festival atmosphere on Kearsney’s beautiful campus, as well as KwaZulu-Natal’s glorious Easter weather.

As in the past, four primary school teams will be offered the opportunity to participate, providing young players with the excitement and challenges of playing on a full-size field in front of large crowds. This year Highbury Preparatory, Hillcrest Senior Primary and Umhlali Preparatory will face the KZN Rugby Union’s Ibutho U13 team to open each day’s play.

The primary school games kick off at 09h30 daily and will be followed at 10h30 by five tough match-ups between the 10 senior 1st XV teams.

Talent scouts and selectors from the Sharks and Sharks Academy will watch all three play days over the Easter weekend: Thursday 9th, Saturday 11th and Monday 13th April.

The Sharks Academy will offer full bursaries for 2021 to three selected players. These include a contract with the Sharks Academy, accommodation and a tuition bursary with one of its reputable education partners. The recipients of the bursaries, valued at over R120 000 each, will be announced immediately after the final game of the festival.

Van den Aardweg thanked the festival sponsors, whose valued support had enabled the festival to grow over 13 years. Standard Bank remains as headline sponsor with Halfway Ford, MTN and the Hendok Group continuing their support, together with the Sharks and Sharks Academy who have been involved since the festival’s inception.

As festival title sponsor and the school’s banking partner for 23 years, Standard Bank’s head of KZN credit, Brian Busse said they were seeking to harness the power of the country’s Rugby World Cup win in 2019 and translate it into a sustainable schools rugby programme which will change the country’s landscape.

“2020 will see one of South Africa’s greatest school rugby festivals honour the country’s new rugby icon and leader along with his pack, by manifesting their efforts into a tangible representation of hope for all young South Africans who dream of following in his footsteps,” Busse said.

Spectators and players are encouraged to leave new or good condition second-hand rugby kit and clothing in the designated collection area at the main field. The ‘Boots and Balls’ outreach initiative, started five years ago, will ensure all donated kit is sorted and distributed. It will be divided between the newly established Siripat Lions Rugby Club, the Reservoir Hills Rhinos Rugby Club and the KZN Rugby Union development programme for distribution to development teams throughout the province.

Gate entrance to the festival is R30 per person, but free for children under six. Ample parking will be available; as well as food and refreshment outlets for those wanting to enjoy a full day of entertaining rugby. The festival’s family-friendly environment offers something for the whole family, including the popular KidZone with exciting rides and jumping castles for little ones to enjoy.

Fixtures and festival information are available on www.kearsney.com