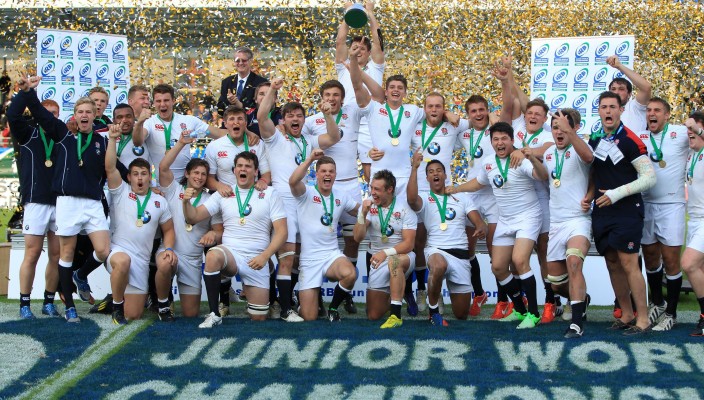 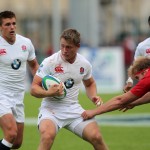 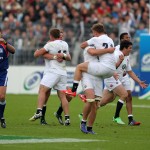 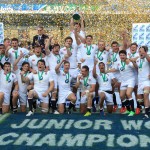 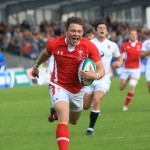 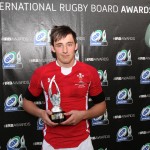 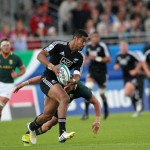 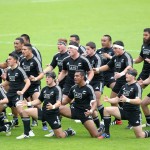 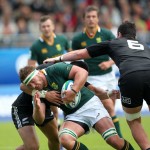 HIGHLIGHTS of ENGLAND v WALES in FINAL of JWC 2013

An impressive second half display saw England finally crowned IRB Junior World Championship winners after beating Wales 23-15 in the final at the packed out Stade de la Rabine in Vannes, in north west France, on Sunday.

England had been the favourites going into the match, but they found themselves 15-3 down at half-time against a Welsh side determined not to suffer more heartbreak against their rivals after losing the Six Nations title decider to them in March.

Full back Jack Nowell started the recovery with a try in the 58th minute and as momentum continued to build for England there was no way back for the Welsh with a further try from Sam Hill and the boot of Henry Slade securing the win and the title.

Wales had earlier ensured the locals in the crowd were immediately in their corner by emerging for the warm-up at the Stade de la Rabine with the Breton flag, acknowledging the Celtic connection of the Brittany region of France.

It was England, though, who made the better start in the first few minutes of the final and had the chance to take the lead only for fly half Henry Slade to miss his first kick of the knockout stages, pulling his penalty wide.

Two minutes later another piece of brilliance from fly half Sam Davies resulted in the opening try for wing Ashley Evans in the right corner, the same outcome in the dying minutes of the semi-final against South Africa that secured their place in a first JWC final.

First his blind pass saw Wales attack to within a metre of the England try-line and then when the ball came back to Davies, he kicked cross-field straight into the arms of the waiting Evans, who merely had to dive over the line for the opening try.

Slade and Davies exchanged penalties before Wales scored their second try, the pressure applied on the England attack resulting in prop Alec Hepburn’s pass falling nicely into Evans’ hands and there was no stopping the wing with the Welsh replacements diving on him in celebration at the 15-3 lead.

They were fortunate not to concede a try minutes later after a great break from Ben Howard, the wing slicing through an advancing Welsh defence only to be stopped by Jordan Williams and the ball to go forward as he tried to find his supporting players.

England thought they had cut the deficit on the stroke of half-time when second row Tom Price touched down, but referee Mike Fraser went to the TMO after a report from his assistant and the try was disallowed for an offence at the preceding ruck with Dominic Barrow sin-binned for use of the knee.

The score remained that way for nearly the hour mark despite some promising attacks for both sides, Davies missing with a drop goal attempt in the 49th minute to increase Wales’ advantage over their traditional rivals before their opponents were returned to 15 men.

England had a second try ruled out with replacement prop Danny Hobbs-Awoyemi adjudged to have been held and then crawled his way over the line, but they finally got their try when half backs Rhodri Williams and Davies failed to stop full back Jack Nowell.

Slade added the conversion and as momentum began to swing in England’s favour and Davies uncharacteristically put it out on the full from just outside his own 22, they earned another kickable penalty, only for the fly half to pull it badly across the posts.

It mattered little though as a missed kick for touch from Williams was instantly punished with England working it quickly down field before centre Sam Hill charged through the defence and, despite three players trying to stop him, dotted the ball down.

Slade’s conversion gave England the lead for the first time, 17-15, and they continued to pile the pressure on the Welsh in an attempt to ensure they weren’t to be denied the title at the fourth attempt after three final losses to New Zealand in 2008, 2009 and 2011.

The Welsh continued to battle bravely in their bid to record a first ever win over England at Under 20 level, but were unable to truly stem the white tide and two more penalties from Slade ensured that his side were the ones jumping for joy at the final whistle.

England captain Jack Clifford: “Amazing, I have never felt anything like it before, awesome feeling and very humbling. The support we had and the way the guys played was just fantastic. We had to pull together and it was all about heart then, we had one man down and 12 points down, it was all about the heart and putting in 150 per cent. It was all about playing with tempo and going round the corner and out-work them. I think after maybe our second try that maybe we had it, but there was no point where I thought we really had it definitely, all credit to Wales they are a great team and they really took it to us.

“It’s an awesome feeling and a highlight of my career so far. I said that when winning the Six Nations but this really is. I don’t think there’s a better way to sign off as we have just won the World Cup. Everyone is so happy and I think the boys are just going to enjoy this moment.”

Wales fly half and IRB Junior Player of the Year 2013 Sam Davies: “It is an honour (to be named IRB Junior Player of the Year), just to see the names of the other people that have had it before me, it makes it extra special. I’m gutted with the result today but this is a bonus picking up this award. Hopefully, I can pick up where I left off and crack on with pre-season and look to get into the first team with the Ospreys.

Wales captain Ellis Jenkins: “It’s tough you know the second time this season that we have come unstuck against England but I’m extremely proud of the boys and what we have achieved in this tournament. We have come a long way as players, as a team and as friends.

We had the opportunity but unfortunately we didn’t make the most of it. Take nothing away from England and have shown several times this season why they are Six Nations and world champions and credit to them they are deserved winners.