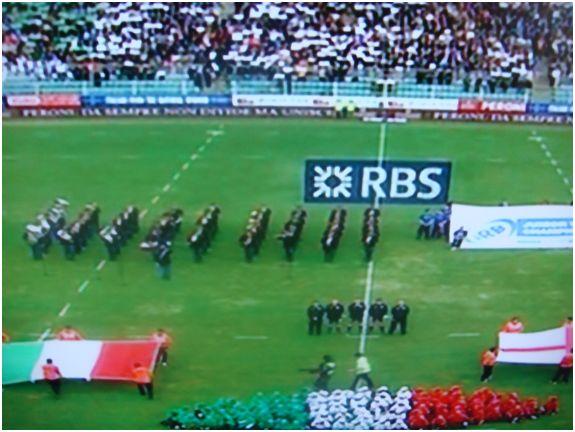 England had a less than comfortable win against a brave Italian side in the RBS Six Nations clash in Rome. England managed to beat Italy with a narrow 17-12 score line.

A brace of penalties apiece from Jonny Wilkinson – who missed three kicks in all – and Mirco Bergamasco made it 6-6.

Mathew Tait’s fine try early in the second half put England ahead before Wilkinson slotted his third penalty.

Despite their opening win over Wales, England are still lacking in confidence and struggling to find the right balance between their conservative instincts and the need to play with pace and width against limited opponents who can match their traditional strength up front.

Italy who have been blamed for negative play and only defending a narrow scoreline in prevous matches played with positive intent of their own and when Alessandro Zanni claimed Craig Gower’s cross-kick, Italy came desperately close to the first try of the match.

England captain Steve Borthwick claimed two Italy throw-ins in quick succession to halt the hosts’ momentum and help set up the platform for Wilkinson to open the scoring with a penalty.

Italy hit back in similar fashion through Bergamasco – not regarded as a front-line Test goalkicker – straight after the restart when Nick Easter was penalised for not releasing after making a tackle, before a remarkable Wilkinson run came to an end.

He had not missed a penalty for England in games he had started since 2003, but the Toulon player made a poor connection with a long-range kick and it fell short.

Worse was to come for the iconic England fly-half just after the 20-minute mark when he missed a far simpler effort, to gasps of disbelief from the massed ranks of travelling England fans at the Stadio Flaminio.

The visitors had a let off as Bergamasco’s radar also went awry but after some bright moments in attack England had begun to lose their way and after they came off worst in the latest of a series of increasingly tedious kicking duels, the Italy wing landed his second penalty to give the Azzurri a 6-3 lead.

With half-time looming Armitage and Riki Flutey decided they had had enough of aimlessly putting boot to ball in their own half and they launched a superb counter-attack from deep which ended with Wilkinson levelling the scores with his second penalty.

With Italy’s strength lying in their forwards, England’s clearest advantage was out wide but their fear of running the ball from their own half – surely under orders from the England coaching staff – was hampering their efforts to develop any attacking momentum.

Italy levelled the scores through a Bergamasco penalty straight after the restart before England cut loose with a cracking try as Easter, Ugo Monye and Armitage combined to send Tait racing over.

Wilkinson’s struggles with the Mitre brand of ball continued as he missed the conversion but England were looking much more positive when they had possession.

Just before the hour mark Italy lost prop Martin Castrogiovanni to the sin-bin after he infringed with England five yards out and Wilkinson edged them into a 14-6 lead with a simple kick.

But England could not take advantage of the Leicester tight-head’s absence and Italy even managed to reduce the lead as Bergamasco landed his third penalty.

Any signs of life from England had by now disappeared and the game had turned into a real dog fight, with the hosts on top.

They cut the gap to just two points with 10 minutes remaining with a fourth penalty from Bergamasco and for a moment it looked as though they would reel England in to claim their first ever win over the visitors.

But England managed to establish one final attacking position and Wilkinson slotted a right-foot drop-goal to give them some much-needed breathing space.