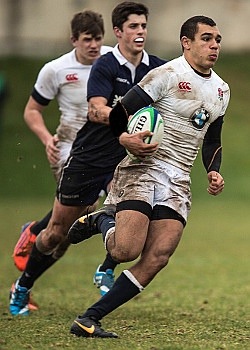 England Under 18 make it two from two in South Africa

ENGLAND Under 18 are two wins from two games in South Africa after beating France 23-6 in George.

Under the imposing gaze of the Outeniqua Mountains, Joe Marchant’s intercept try when the game was on a knife-edge at 9-6 swung the game into England’s favour and John Williams’ late try on debut sealed the win.

It wasn’t all plain sailing for England as France more than held their own in an even first half. But after going in 6-6 at the break, the second period belonged to England who pulled away towards the end.

Head Coach John Fletcher said: “It was another tough game, as it always is when you play France. I thought that we dominated the game for periods, but France defended and tackled well, and to be fair they had a long spell in our half.

“We made a few too many unforced errors, particularly early on in the game. But I thought that we were quite comfortable throughout and we’ve come through with each player on tour having had a start which will start us in good stead for Saturday’s game against South Africa.

“We know what South Africa will bring – they mirror the Seniors. They’ll be big and physical, which is what we expect, we’ll have to up our game and put in a big performance, which I know we are capable of.”

England Under 18 starting XV against France