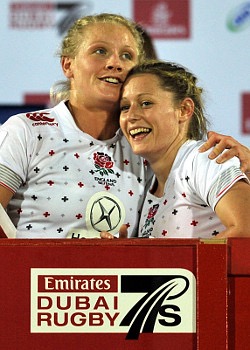 ENGLAND Women have won the Dubai 7s Plate, and with it valuable Series points, after a tense 19-12 victory against Fiji.

Natasha Hunt was the star of the show with two tries, her second being the extra time winner with both sets of players tiring.

England had started brightly and went 7-0 up through Jo Watmore, but Fiji hit back to make it 7-7 at the half-time buzzer.

Hunt scored her first early in the second half to make it 12-5, but again Fiji found a way back and levelled it up to take the game into extra time.

With the five minutes of allotted time played Hunt spotted a gap and went for it, leaving the Fijians trialling to secure fifth place.

A nervy Plate semi-final was the precursor to the Fiji game, as Simon Middleton’s side beat Russia 21-19 in a thrilling contest that went right to the wire.

A brace of tries from the lively Alice Richardson inspired England to a 21-7 lead, but Marine Petrova sped in under the posts to complete a sublime hat-trick on the final play.

However, a superb game ended on a cruel note as Nadezhda Kudinova missed the simple conversion.

England had started on the front foot as Richardson’s kick-off was spilled and Hunt helped conduct some patient phase-play.

Russia broke out to drew first blood through Petrova though, and built pressure themselves with some tenacious industry at the breakdown.

It took Danielle Waterman to inspire England, the 15-a-side World Cup-winner clearing up a loose ball to launch a counter that eventually saw Hunt sprint clear.

This was the cue for England to impart their clinical attacking game. They put together a series of clinical, sweeping handling moves from deep, using the full width of the field and sapping their opponents’ energy in the intense heat.

Richardson was the beneficiary either side of half-time, first fed by Waterman’s pass and then after linking with replacement Claire Allan.

Russia would not be denied though, and stormed back through Petrova to set up the tense finale.

Earlier, England bowed out of the Cup competition, falling to a narrow 7-5 loss against France.

In a tense and physical battle, France held their nerve in the final quarter despite a surge of English pressure.

French skipper Fanny Horta scored in the first half and the ultimately crucial conversion was sent over by Christelle Le Duff.

England had chances and good footwork from Jo Watmore almost led to a try at the end of the first half, but her second kick sent the ball out of play.

She made amends in the second period going over to score, but from a tight angle Richardson’s conversion sailed wide.

It stayed 7-5 until the buzzer when Watmore kicked downfield, she had the pace to pick up but the bounce sent the ball out of play.