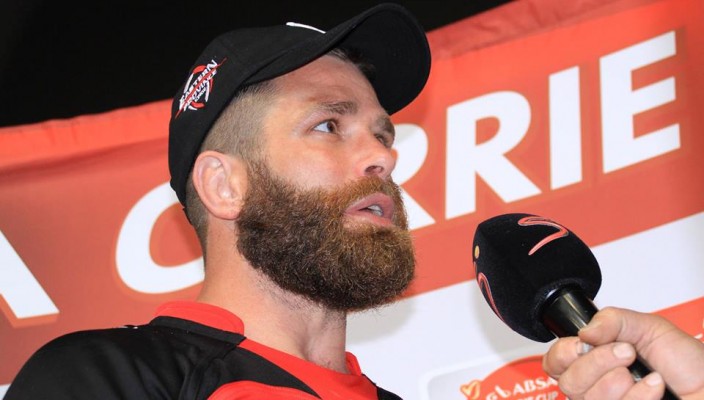 INJURIES have forced EP Kings coach Brent Janse van Rensburg to make three changes to the starting line-up for their Absa Currie Cup match against the Pumas at the Nelson Mandela Bay Stadium in Port Elizabeth on Friday (August 21, kick-off 19.00).
Two of them occur in the backline, with centre Tim Whitehead out through concussion and flyhalf George Whitehead suffering from a bang on the knee.
This has resulted in experienced centre Ronnie Cooke returning to the starting line-up at outside centre, with a positional switch being made by moving JP du Plessis to inside centre.
“Ronnie has plenty of experience and we believe we will benefit from his leadership abilities as well,” Janse van Rensburg said of the team’s deputy.
Karlo Aspeling steps in to take over at flyhalf, while Jacques Engelbrecht will replace Stefan Willemse on the side of the scrum. Willemse has been included on the bench, but Janse van Rensburg said the flank had a slight niggle, which they believe will clear up for Friday’s game.
“But Stefan hasn’t been able to take full part in our practices in the early part of the week, so we will start with Jacques and use Stefan on the bench,” Janse van Rensburg said.
The Kings coach confirmed that flyhalves Elgar Watts and Gary van Aswegen were still on the injured list and not available for selection.
Janse van Rensburg is backing his team to make further improvement this week after a fighting performance against the Sharks saw them lose 33-25 in Durban. He acknowledged, though, that they would face a fired-up Pumas outfit.
“We know we need to up for a big challenge against the Pumas, who are a tough, abrasive side and play an attacking game,” Janse van Rensburg said. “We know we had a chance to put away the Sharks on Saturday, but did not take our opportunities and we made it hard for ourselves.
“But there has been improvement and lessons have been learnt, and it is up to us to keep working hard and to keep looking for consistent improvement each week.”
The EP Kings team is (1-15): Schalk Ferreira, Martin Ferreira, Tom Botha, Steven Sykes, Cornell Hess, Luke Watson (captain), Jacques Engelbrecht, Tim Agaba, Enrico Acker, Karlo Aspeling, Luther Obi, JP du Plessis, Ronnie Cooke (vice-captain), Siyanda Grey, Scott van Breda.
Replacements (16-22): Lizo Gqoboka, Edgar Marutlulle, Simon Kerrod, Stefan Willemse, Thembelani Bholi, Kevin Luiters, Hansie Graaff.