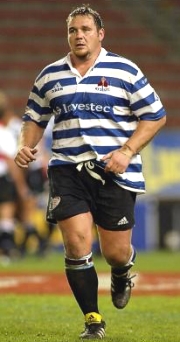 The Eastern Province Rugby Union wishes to express its sadness at the passing of Morne van der Merwe early this morning.

Morne, who passed away at the age of 39 after losing his battle with brain cancer, was a highly rated loosehead prop. He entered rugby rather late in his sporting career, having preferred swimming and cricket at school.

Having broken into the sport in the UPE under-21 team he quickly made up for lost time though, and was E.P’s leading try scorer in the Bankfin Currie Cup in 1999, with seven tries.

At 1.86m tall and weighing 125kg in his prime, Morne will always be fondly remembered as The Fridge, after EP scrumhalf Chad Alcok was slammed by his coach for keeping hold of the ball when “you had a man as a big as a refrigerator outside you!”

Morne finished his playing career in the colours of Wellington in New Zealand where he packed down with former All Blacks hooker, Norm Hewitt.

He leaves behind his with Cindy, and their two sons, Josh and Matt.

EP Rugby Union President, Cheeky Watson said: “It is always sad when we lose a member of the rugby fraternity. Morne will always be fondly remembered at E.P and there is some solace in knowing that after his two year battle with the disease he can finally find peace.”

“Our thoughts are with his wife and children during this trying time,” he said.