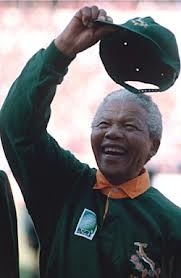 Eastern Province Rugby mourn the loss of former president and international icon, Nelson Rolihlahla Mandela, who passed away at his home on Thursday, 5 December 2013, at the age of 95.

“Mandela lived an extraordinary life and will be forever remembered for the role he played in the uniting of a divided South Africa, for his humble spirit, his compassion and the personal sacrifices he made to bring about a better future for all,” said EPRU President, Cheeky Watson.

Watson said among the many wisdoms Mandela had shared with the world, were his insights on the role that sport could play in uniting people across racial lines.

“It speaks to youth in a language they understand. Sport can create hope where once there was only despair. It is more powerful than government in breaking down racial barriers. It laughs in the face of all kinds of discrimination.”
Watson said that EP Rugby would continue to build on this ideal, by advocating for non-racial sport and striving to unite people through their passion and love for the game of rugby.

“Our thoughts and prayers are with the entire Mandela family, with his friends and colleagues and also with the rest of the South African people who today mourn with us at the loss of South Africa’s greatest son,” said Watson.