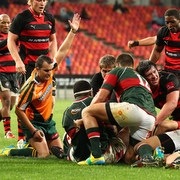 The Absa Currie Cup First Division Final between the Steval Pumas and EP Kings at the Mbombela Stadium in Nelspruit on Friday is expected to culminate into a spectacle as the top two teams in the series battle it out for the trophy and the R1m winner’s cheque after 15 weeks of physically taxing rugby.

The teams met in the Final last year in Port Elizabeth, and with little separating them in terms of their quality of play, the Kings edged to a 26-25 victory.

This year’s Final, which will start at 19h10, is expected to be equally epic given the high standards displayed by both teams this season.

The Pumas will enter the clash as favourites with form and home ground advantage counting in their favour. The fact that they have are unbeaten this season will boost their confidence going into the clash.

But the Kings have had an impressive run following the return of their star players following the Vodacom Super Rugby series, and boast nine victories in their last 10 matches, with the defeat being against the Pumas.

Should the Pumas win the final it would mark their first title since 2009, but this result would also boost their confidence with an eye on the promotion-relegation playoffs against GWK Griquas in the next two weeks for a spot in the Premier Division next season.

A victory for the Kings, meanwhile, would not only mark back-to-back titles for the team, but also their third victory in four finals dating back to the 2010 season.

Both coaches have pinned their hopes of a victory on the players who have delivered the goods in the last few weeks, with the starting teams each featuring only one personnel change.

In the Kings front row, experienced hooker Hannes Franklin returns at the expense of Albe de Swardt, while the change in the Kings team is at loosehead prop where Corné Fourie replaces Vincent Koch.

With both teams boasting quality packs, the set-pieces are expected to be tightly-contested. Both teams also boast dependable goal kickers in Bezuidenhout and Kings’ fullback Scott van Breda, meaning the teams will be wary of the fact that good discipline will be essential to prevent conceding unnecessary points.

While the winners will walk away with R1m, the losing team will receive R500000.