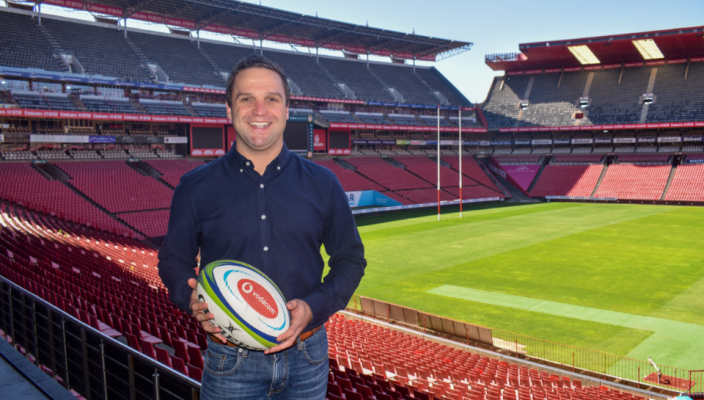 Rathbone has been instrumental in securing the sponsorships of the Emirates Lions and Xerox Golden Lions Rugby Teams respectively, as well as the success of Emirates Airline Park as a Test and Events venue.

He joined the Lions Rugby Group in 2013 as Financial and Administrative Manager before becoming Chief Financial Officer in 2014. In 2017 Rathbone became Managing Director of Ellis Park Stadium whilst continuing his role as Commercial Manager within the Lions Rugby Company.

Rathbone described the decision to take up the offer as a very difficult one to make. “It has been an enormous privilege to have led EPS during an important period of transformation and growth. I am proud to have worked with remarkable colleagues and will always cherish these memories”.

“I want to thank the Lions for the support they have given me during the last seven and a half years. I was given the opportunity I wished for to work in rugby at a very young age. My time with them has been nothing short of memorable with the highs outweighing the lows. This includes various successful sponsorship agreements and a host of sold out events, all the interactions with the loyal Lions members and suite owners and especially the relationship I have with Rudolf (Straeuli) and Altmann (Allers) who taught me so much about rugby and business,” says Rathbone.

Rudolf Straeuli, Chief Executive Officer of the Lions Rugby Company, expressed his sadness but also well wishes at the loss of Rathbone, who has been a confidante and good friend during their time together.

“We understand and support his decision to take up this offer and we are grateful for the many accomplishments under his watch. I look forward to working with him on a new front and know together as CEO’s, although “competitors”, we will always share our passion for the game and longevity for the sport” Straeuli concluded.

Altmann Allers, owner of Ellis Park Stadium and Chairman of Lions Rugby Company, wished Rathbone all the best for the next chapter of his career. “Edgar joined us during a very challenging time when the Lions just came back into Super Rugby. One of his immediate responsibilities was to get the business back on track commercially through securing additional sponsorships and generating new revenue streams for the Lions. Through hard work and determination, he managed to show positive results within a short period. When Rudolf joined the Lions a few months later, they formed a formidable team which led to countless successes on various levels.”

“With his passion and interest in all aspects of rugby, Edgar grew and reached great heights which added value to the Lions. We will miss him and wish him all the best in the next chapter of his already remarkable career,” concluded Allers.