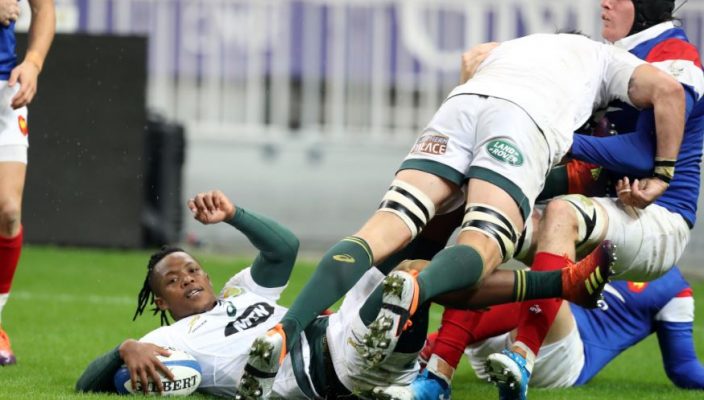 Rassie Erasmus, the SA Rugby Director of Rugby, praised the calmness of the Springboks to stay in the fight right to the end against France at the Stade de France late on Saturday evening despite enormous defensive pressure from the French side.

Bongi Mbonambi crashed over for the winning try in the 85th minute to clinch a thrilling 29-26 comeback win for the Springboks in Paris. France led 16-9 at halftime and managed to increase their led to 23-9 at one stage, before the Springboks started with their successful fightback in front of a lively Parisian crowd.

“Last week we took it through 15 phases to get a penalty to win the game (and it didn’t happen) and this week we had to score a try to win the match,” said Erasmus, who mentioned that his side learnt a lot from last weekend’s mistakes at Twickenham where England edged South Africa by a single point.

“It was definitely not the most clinical performance but the team was gusty enough and it feels much better (than last week).”

France were the better side in the first half and they managed to stretch their halftime advantage to a threatening 23-9 lead after the break.

“We’ve done it a few times this year where we were behind quite early in the match, but this score line happened just before and after halftime and that made it tough,” admitted Erasmus.  “There were a few big moments (for us) and I thought our guys handled those and the pressure very well.”

The South African confidence increased as the second half progressed, and they were rewarded for their efforts by virtue of two converted tries, scored by Sibusiso Nkosi and replacement hooker Mbonambi, while Handre Pollard slotted five penalties for a faultless kicking display.

Springbok skipper Siya Kolisi was also full of praise for the Springboks’ fighting spirit, which saw them grinding out a morale boosting win.

“We kept on fighting and it was special to see the energy of the guys at end. We though Cheslin had scored and Aphiwe’s try was ruled out (because of a forward pass) but we pressed on and I’m glad we were rewarded today,” said Kolisi.

The Springboks now travel to Scotland for their third match of the tour next Saturday against Scotland in Edinburgh.