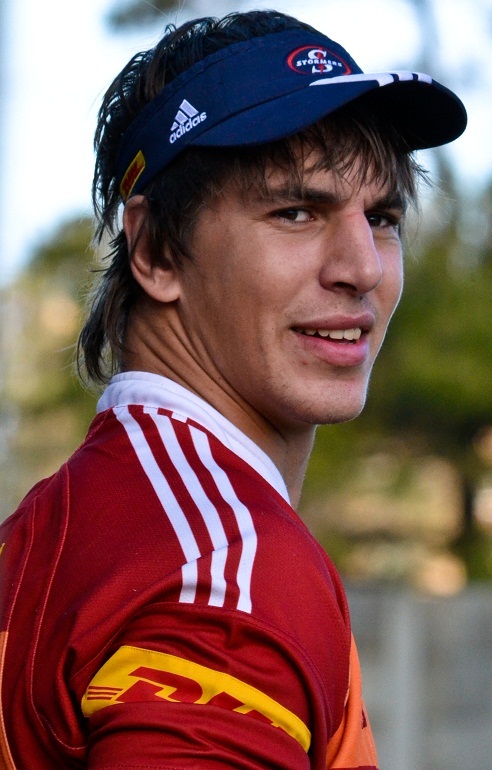 The monstrous Eben Eztebeth just after the became a Springbok. Photo by Morgan Piek /Rugby15.

The rise of young Springbok lock Eben Etzebeth was confirmed on Wednesday when he was nominated in three categories for the prestigious South African Rugby Union (SARU) Rugby Player of the Year Awards, which take place in Cape Town on Thursday, November 1.

The nominations cap a dream year for Etzebeth, who celebrates his 21st birthday next week. He starred for the DHL Stormers in Vodacom Super Rugby before making his Springbok debut against England in Durban in June. On Saturday he will represent DHL Western Province in the Absa Currie Cup final.

The final two nominations in the category for SARU Rugby Player of the Year are Pat Lambie, who was voted Young Player of the Year in 2011, and veteran Springbok wing and two-time winner (2005 and 2007) Bryan Habana, who extended his try-scoring record in Tests to 47 this year after some great displays in the green and gold.

KwaZulu-Natal’s impressive season is reflected in nominations for Absa Team of the Year, with both Sharks teams (Vodacom Super Rugby and Absa Currie Cup) nominated. They are up against the Junior Springboks, who won the IRB Junior World Championship in South Africa earlier this year, the DHL Stormers, who topped the log in Vodacom Super Rugby, and the Absa Currie Cup First Division champions, the EP Kings.

The Absa Coach of the Year will be one of Allister Coetzee (DHL Stormers and Western Province), Pote Human (GWK Griquas), John Plumtree (The Sharks), Alan Solomons (EP Kings) or Dawie Theron (SA Under-20).

For the first time the public were able to vote in the Awards, through a voting process on the Springboks’ Facebook page, alongside the country’s rugby media, who traditionally vote for the winners in some of the categories.

The nominees for 2012 are (in alphabetical order):

SARU Rugby Player of the Year:

Young Player of the Year:

Absa Team of the Year:

Absa Coach of the Year:

Vodacom Cup Player of the Year: