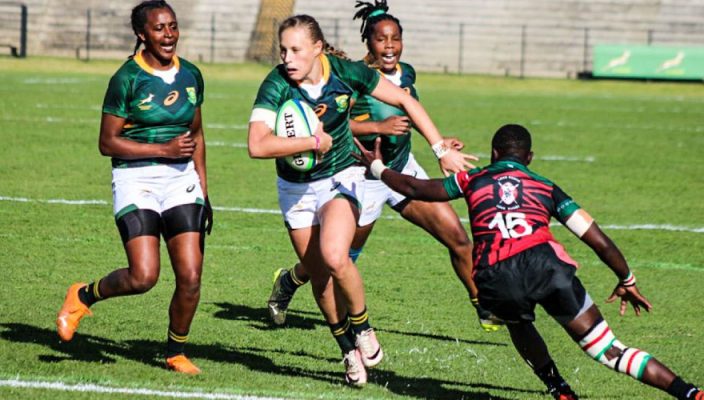 Former Madibaz student-athlete Eloise Webb said she would continue to work on her game after returning to action for the Springboks in the two-Test rugby series against Kenya over the past week.

After trouncing the East Africans 66-0 in Thursday’s opening encounter, the SA women’s side were given a much tougher match on Monday, eventually winning 29-22 in Stellenbosch.

The 25-year-old Webb, who studied at Nelson Mandela University from 2015 to 2018, played in both games and said it was exciting to get back into the swing of things as they continued the build-up to the World Cup.

This tournament will take place in New Zealand next year after being postponed from 2021 due to the Covid-19 pandemic.

Playing at fullback, the Cape Town-based Webb said they had placed an emphasis on a number of areas to work on in the Kenyan series.

“We had certain focus points for both Tests that were important for the team and we also had to adapt to the situation of having a number of players coming into the side for the first time,” she said.

“It was a great opportunity for all of us to play again and to focus on the different departments of the game.”

Webb scored two tries in the first Test as the Boks ran away with the game, but said it was a much tighter clash this week after the Kenyans brought in several sevens players who had arrived back from the Olympic Games in Tokyo.

“They definitely brought the game to us yesterday [Monday] and it was a really good challenge for us,” she said “As a team we had to stick together and work hard for the win.

“I was happy with some points of my performance but there is still a lot to work on going forward.”

She added that the next focus would be on a training camp which is scheduled to be held towards the end of October.

Webb is a talented sportswoman and played high-level cricket and netball, as well as throwing the javelin, before finally settling for rugby’s oval ball.

She said she was not that enamoured with rugby initially, but encouragement from her family saw her persist with the sport, which she has now come to love.

Her time at NMU saw her develop her sporting skills.

“Studying at Nelson Mandela University was an amazing experience,” she recalled.

“I played netball and rugby at the time and the managers were incredible. They helped me grow as a person and as an athlete.

“Also my lecturers helped me a lot as I was often away due to my rugby commitments, but they still allowed me to do my tasks and assignments online, which was great.

“I will always be grateful for the opportunities I received at varsity, which allowed me to further my sporting career.”