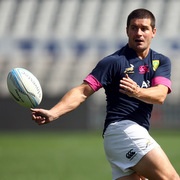 Excitement builds for the Springboks vs All Black clash

With less than 24 hours to go before kick-off in Saturday’s fourth Test in the Castle Lager Rugby Championship between the Springboks and New Zealand, excitement levels have been steadily increasing in Auckland.

Fridays prior to Tests traditionally provide the opportunity of the Springbok captain to address the media and Jean de Villiers used his media conference this morning to reiterate how much the South Africans are looking forward to the Eden Park Test.

The Boks have not won at Eden Park since 1937, but in 1994 they were the last team that managed to keep New Zealand from winning a Test at this famous venue when they drew. Since then, the Kiwis have won 30 on the trot in Auckland.

The last Springbok victory over the All Blacks in New Zealand was in 2009, when they went on to win the Tri-Nations (now the Castle Lager Rugby Championships).

“We’re up against one of the best sides of all time, and having not won at this ground for a long time is going to be a massive challenge,” said De Villiers, who was one of the Boks’ try-scorers in Hamilton four years ago.

“I’m proud of how far we’ve come. There’s a lot of confidence and belief that we can do something special this Saturday, but then I’m sure a lot of teams have felt that way before playing at Eden Park.

“The reality is we’re playing against a team that doesn’t lose too often, and on a ground where we haven’t won for 76 years. To win, we have to make zero mistakes. The bounce of the ball will have to go our way.

“If we can continue to improve in our performances from this season, we will have a chance. We have to give absolutely everything. There is nothing to lose this Saturday.”

The Boks had a good captain’s run at Eden Park later on a gloriously sunny Friday morning in Auckland. However, the weather prediction for Saturday is rain, rain and more rain.

Be that as it may, when the first whistle goes at 19h35 (09h35 SA time) on Saturday, the playing field will be level and the Boks will have an opportunity to make another stride as they improve as a team.