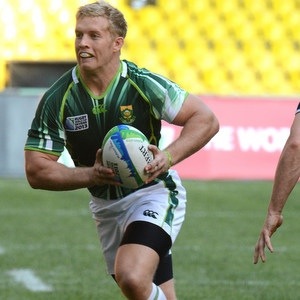 SARU has announced an experienced Springbok Sevens squad to play in the Gold Coast Sevens tournament on 12 – 13 October in Australia, which marks the first tournament of the 2013/14 HSBC Sevens World Series presented by the International Rugby Board.
Livewire scrumhalf Branco du Preez and wing Seabelo Senatla were not considered due to injury. Du Preez is recovering from hip surgery and should make his return to action early in December. Junior Springbok Senatla is out with a lower back injury.

Their replacements are Sampie Mastriet, a regular on the wing for the Vodacom Blue Bulls, and Mark Richards, who himself has now recovered fully from the Achilles heel injury which has kept him on the sideline for most of the previous season.

Otherwise, the squad have a familiar and settled look, with veteran Frankie Horne set to play in his 51st World Series event and captain Kyle Brown in his 34th tournament. Prolific try scorer Cornal Hendricks will especially be looking forward to continuing with his try-scoring exploits after scoring the second most tries in the World Series, which consists of nine tournaments worldwide.

The Springbok Sevens team is: