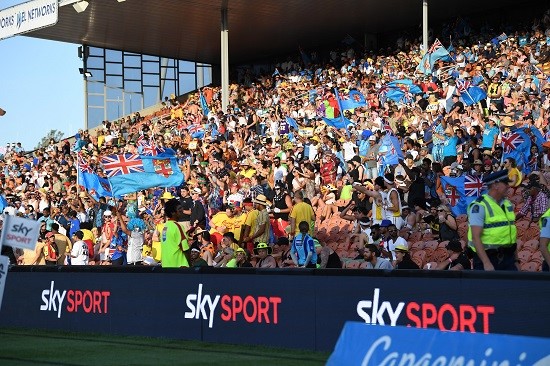 Fans soak up sevens and sun in Hamilton

A crowd of 18,000 basked in the Hamilton heat as the Black Ferns Sevens and All Blacks Sevens made winning starts to the weekend on Day 1 of their home tournament on the HSBC World Sevens Series.

Many fans opted to shelter from temperatures, nearing 30 degrees, in the Mill Street R18 zone where marquees, tents and water stations provided welcome relief, and a concert from popular roots-reggae band Sons of Zion one of the highlights of the weekend.

“There was a bit of everything today with the women’s teams showing exactly why we pushed so hard for a fully integrated tournament in New Zealand with the quality of their play, a 21st birthday party atmosphere on Mill Street, and some intense Pool play.”

The Black Ferns Sevens posted convincing wins over China (40-7) and England (40-7), while the All Blacks Sevens kept Wales scoreless (47-0) before overcoming the USA (26-5) in the final match of the evening.

Tickets would be available to buy at the gate on Sunday and Dunbar expected the crowd to build on Day 2 as it had during last year’s event.

Managing Director 37 South, and co-promoter of the event, Dallas Fisher said Hamilton had turned it on and set the stage for another thrilling finale on Sunday.

“Once again we’ve seen party goers and families enjoy all of the festival attractions the venue has to offer. It’s a unique event where fans can move between the sport and the entertainment throughout the day.

“Mill Street was absolutely packed for much of the day and when the big games were on the field the energy in the bowl was as electric as ever, especially when the New Zealand and Fijian teams were in action. Tomorrow’s finals will be another great occasion.”

Fisher reminded fans attending finals day that if they planned to leave the venue they needed to ensure they returned before 6.00pm for re-entry, a requirements of the event’s liquor licence.

Police made one arrest and despite a number of evictions for breaches of the terms of entry to the venue, detective Inspector Hywel Jones said crowd behaviour had been good.

St John District Operations Manager Stuart Cockburn said only one patient had been taken to Waikato Hospital. With high temperatures forecast for Day 2 fans should remain vigilant in applying sunscreen and staying hydrated.