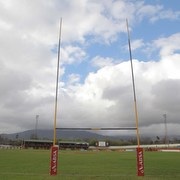 Final throw of the dice for First Division teams

The round-robin stages of the Absa Currie Cup First Division will come to a close with a gripping round of matches on Friday, which will see some teams play for pride and others for favourable log positions.

With the Steval Pumas having secured the top spot on the log and a home semifinal, they could afford to be relaxed, while the EP Kings need only one point to cement their fourth successive home semifinal in the series.

The big battle, however, is expected to be between the SWD Eagles and the Leopards as the result will determine which team finishes in third and fourth place respectively on the log, as they have already secured their semifinal berths.

For the remaining teams, meanwhile, this round will be played purely for pride.

In an action-packed Friday, the Regent Boland Cavaliers host the Down Touch Griffons in Wellington, the Valke host the Steval Pumas in Kempton Park, the Border Bulldogs go up against the EP Kings in East London and the SWD Eagles meet the Leopards in George.

The Steval Pumas will enter their clash against the Valke as overwhelming favourites on form, despite resting a few players for the clash. With both star place-kickers JC Roos and the top point-scorer in the competition, Carl Bezuidenhout, being named in the starting team, the Valke will have to be disciplined to prevent these players from doing damage with the boot. The Valke will also have to put their bodies on the line on defence to prevent the visitors from running riot on attack, as they have scored the most tries in the competition. The home team, however, will take comfort from the fact that they suffered a narrow seven-point defeat against the EP Kings last week, which should bolster their confidence as they attempt to create an upset.

The clash in George between the SWD Eagles and Leopards is expected to be nail-biting as both sides have been inconsistent in the last few rounds and will be desperate to gain winning momentum ahead of the semifinals. With home ground advantage and confidence favouring the Eagles, who come off a 50-point score against the Down Touch Griffons, they will enter the clash with a slight mental edge. Given the quality of both teams, which feature tough packs and a few playmakers among the backs, including SWD wing Alshaun Bock, and Leopards wings Luther Obi and Edmar Marais, the clash is expected to be tightly contested.

In East London the EP Kings may have to work hard for a victory despite the Border Bulldogs occupying a position on the lower-end of the log table, as the home team boasts a new-found confidence after creating an upset against the Leopards last week. The Kings, however, come off five back-to-back victories and will use this match to maintain their momentum ahead of the semifinal, meaning they will have all the motivation they need to win.

In Wellington, meanwhile, the Regent Boland Cavaliers will back themselves to beat the Down Touch Griffons given their fair win record this season and their determination to make up for the disappointment of losing out on a semifinal berth. However, the Griffons have shown a steady improvement in their form in the last few weeks and have registered respectable scores despite battling to register victories, which will motivate them. With nothing to lose in both camps, the players are expected to put their bodies on the line.