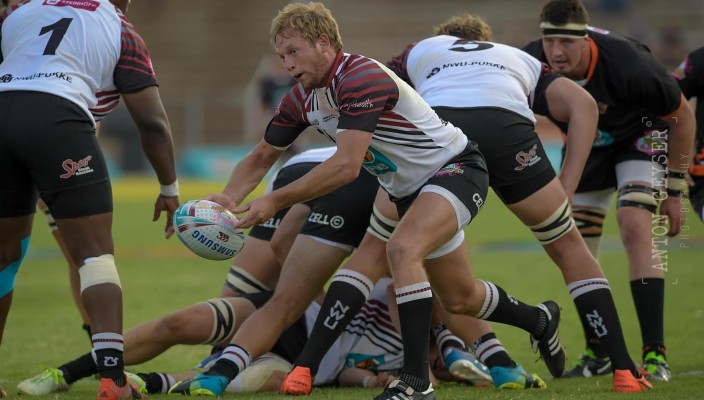 FNB Pukke put in a dominant first half display over FNB UJ to book a spot in their third consecutive FNB Varsity Cup presented by Steinhoff International on Monday at the UJ Stadium in Johannesburg.
FNB UJ, who were playing in their first playoff game since 2013, ultimately, didn’t have the composure necessary to win do-or-die matches. In comparison, FNB Pukke, playing in their third consecutive semi-final, made the most of their limited opportunities to revenge their Round Two loss to the same opposition.

FNB Pukke began the match in emphatic style. Fullback, Rhyno Smith, calmly slotted a second minute penalty to immediately begin applying the pressure. Six minutes later, outside centre, Sylvian Mahuza, dived over the tryline for a terrific converted seven-point try to hand his team a 12-point lead after just eight minutes. However, the momentum would shift in FNB UJ’s favour after this try.

FNB UJ used their scum dominance as a platform to launch dangerous backline moves, but the pressure seemed to be taking hold of the players as knock-ons and careless decisions stifled any promising play from the hosts. Two missed penalties from FNB UJ flyhalf, Divan Nel, meant the Johannesburg-side would have to wait until the 32nd minute for their first points of the game. Again using their scrum as a platform, FNB UJ’s scrumhalf, Devon Mare, burst from the back of a five-meter scrum to find a gap in FNB Pukke’s defence. The conversion from Nel meant FNB Pukke held a slim five-point lead. The next eight minutes proved crucial to FNB Pukke’s cause.

A 37th minute penalty by Smith was followed by a mistake from FNB UJ’s fullback, Ronald Brown, which gifted FNB Pukke with a nine-point try. It was Mahuza who dotted down for his second of the evening. The conversion and a spectacular drop goal, both from Smith, meant the visitors went into the break with a commanding 29-7 lead.

The second half wouldn’t provide the same entertainment as the first. FNB UJ dominated possession for the full 40 minutes, but poor decisions and a faulty lineout meant they failed to add to their tally. FNB Pukke appeared to handle the pressure better than their counterparts, as their resolute defence withstood wave-after-wave of FNB UJ attack.

Smith was in spectacular form, clearing his team’s line on several occasions and kicked two crucial penalties in the 64th and 78th minute to finish with a personal tally of 19-points. These two penalties handed FNB Pukke a 35-7 victory and their third consecutive final spot.

In the end, FNB UJ struggled to impose themselves in a game the statistics say they should have won. The pressure would have the final word, with FNB Pukke handling the gravity of the game far better than FNB UJ.
FNB Player That Rocks: Bernhard Janse van Rensburg (FNB Pukke)