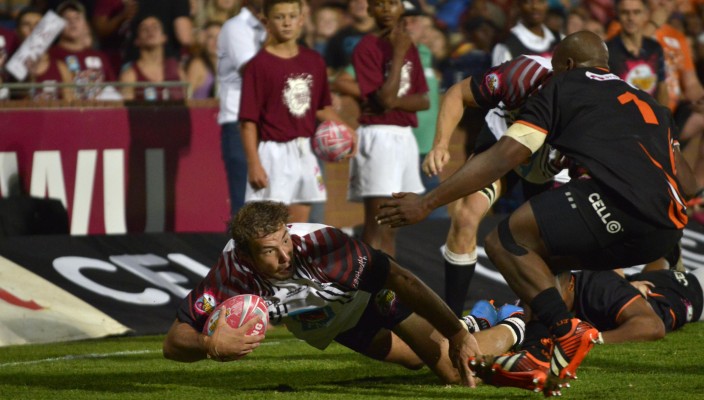 FNB NWU-Puk got off to a flying start when Lucian Cupido rounded off a backline move that screamed enterprise and innovation. FNB UJ twice in succession opted to go for the posts when awarded a penalty, with the second attempt paying dividends as Divan Nel found his target. FNB UJ then secured the lead when Aphiwe Dyantyi unleashed his afterburners to score a beauty. The conversion was good and FNB UJ led 14-7.

FNB UJ’s coach, Werner Janse van Rensburg would, however, have had some strong words for his team, particularly their lack of discipline. They were the recipients of two yellow cards. The second one was especially costly as it allowed FNB NWU-Puk captain Jeandre Rudolph to make like a wing and score down the touchline.

FNB NWU-Puk regained the ascendency two minutes into the second half when Sylvian Mahuza raced away for a nine-point try. FNB UJ did not take this lightly and mounted a massive offensive charge. Jeandre Rudolph was sin-binned for going in from the side as FNB UJ laid siege to FNB NWU-Puk’s tryline. A penalty try followed for the visitors and it wasn’t long before Dyantyi scored his brace after some stellar work by fullback Ronald Brown. FNB UJ led 33-23 at this stage.

The hosts refused to accept what looked like their heartbreaking fate and worked their studs off their boots to get Wilmar Arnoldi over in the left-hand corner. With only five points separating the sides, Rhyno Smith stepped up and kicked an almost 50m penalty from close to the touchline. It dissected the upright posts with glee. FNB UJ responded with a penalty of their own and it was high drama to the end. Some suspect decision-making proved detrimentally decisive for FNB NWU-Pukke.

After last week’s romp of FNB Tuks, this was a rude awakening for Jonathan Mokuena’s side while FNB UJ will paint Potch red, or in this case – orange.