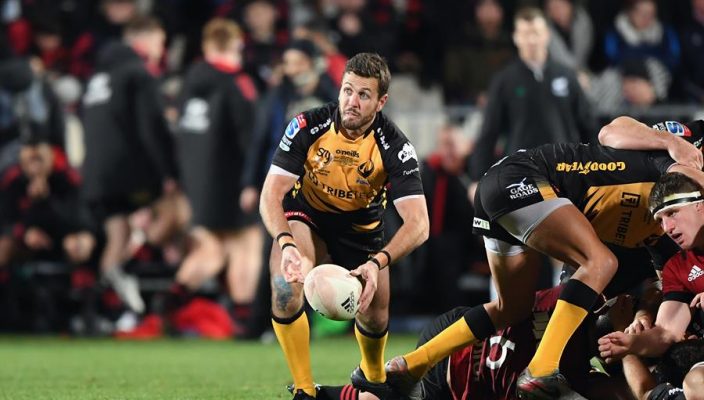 FORCE EDGED OUT BY CRUSADERS DESPITE DOMINANT SECOND HALF

The Western Force narrowly missed out on a win in Christchurch, with the away side sustaining a 29-21 loss to the Crusaders in Round 4 of the Super Rugby Trans-Tasman season.

A fast start to both halves set a positive tone for the Force, but the Crusaders proved too clinical in the attacking half in an entertaining encounter at Orangetheory Stadium.

Captain Kyle Godwin was pleased with his side’s performance, but disappointed to not have got the win.

“Unfortunately, we couldn’t go all the way. We left a few tries out there, but I’m proud of the boys and what they did tonight,” Godwin explained.

“We’ve been growing as a team, every week, every game. We’ve got a lot of potential and the only way we can go now is up.”

The Force opened the scoring in style, with Toni Pulu stepping in from the right wing and racing away to cross over in the third minute for his first for the club. The try came after a silky passage of play and good handling from Jake Strachan to deliver the ball to Pulu. Domingo Miotti made no mistake with the conversion to open an early 7-0 lead.

The hosts responded ten minutes later through Manasa Mataele, who latched onto Braydon Enor’s grubber kick and scored the Crusaders first try of the match. Flyhalf Fergus Burke converted to even the scores at 7-7.

Will Jordan then gave the Crusaders the lead crossing over in the far-left corner following a penalty. Burke was unable to convert as the home side held a 12-7 lead after 20 minutes.

The Crusaders scored their third try of the match in the 28th minute, with Whetukamokamo Douglas touching down from a rolling maul. Burke was unable to convert to leave the score at 17-7 in favour of the hosts.

The Force fought back strongly, with Ollie Callan crashing over for a try in the first Super Rugby start of his career. The homegrown talent, who was fantastic throughout the match, took full advantage of the space opened up by Fergus Lee-Warner after breaking the line. Miotti converted to narrow the margin to three points with 32 minutes played.

A final play try from Sione Havili Talitui, converted by Fergus Burke, gave the Crusaders a 24-14 lead at half time.

The traveling side started the second half with great intensity. Cubelli’s expertly weighted box kick was picked up by replacement winger Jordan Olowofela. The play created a big opportunity for the Force, with Olowofela crossing over, but Richard Kahui’s pass was ruled to have gone forward three minutes from the restart.

Crusaders fullback Jordan responded with his second try of the match with 47 minutes on the clock, with Burke missing the conversion to leave the home side commanding a 15 point lead.

An electric run from the Force’s Jake Strachan on the right wing led to Kyle Godwin pushing over the try line, however, the captain was held up with 55 minutes played.

The Force pushed fiercely to reduce the deficit, as they enjoyed a majority of possession throughout the second half, but they had to wait until the final minute to get their reward. Godwin’s cross-field kick was perfect, as Olowofela sped away from the Crusaders defence to score his fifth try of the season. Ian Prior marked his 100th Super Rugby appearance by converting the try to see the score end 29-21 to the Crusaders.

It was a performance full of intensity and character from the Force, with Tim Sampson’s side pushing the Super Rugby Aotearoa champions for the full 80 minutes on their own turf.

Godwin heaped praise on milestone man Prior following the match.

“Ian Prior is massive for us. He’s been through the thick and thin of it. He’s the heart and soul of the team and I’m so happy he got his 100th Super Rugby game tonight,” he said.

The Western Force continue their tour of New Zealand next week with their final game of the Super Rugby Trans-Tasman competition in Round 5 against the Blues in Auckland on Saturday 12 June.