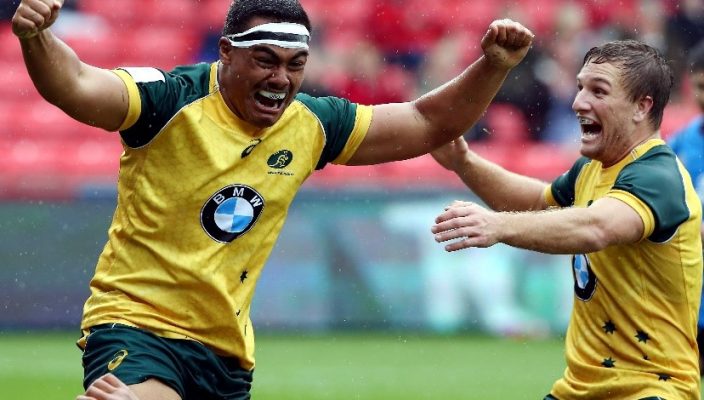 The Western Force has invested in the future of their front row with the signing of Australian U20’s representative and Future Force Foundation product, Shambeckler Vui for the 2017 Super Rugby season.

At just 19-years-old Vui has firmly established himself as one of the nation’s most promising tighthead prospects after standout performances for the Australian U20’s at the Junior World Championships and the Perth Spirit in the Buildcorp National Rugby Championship (NRC).

Vui possesses skill and strength beyond his years and became an internet sensation when he scored one of the best tries of the Junior World Cup with a barnstorming 50-metre run against Italy.

The young gun says he is thrilled to have put pen to paper with the club and has his sights set on a debut next season.

“It’s a dream come true to actually sign my first contract with the Force,” he said. “I took a big leap of faith when I came out here and it has paid off. Hopefully, I can get my first Super Rugby cap in 2017.”

“It’s been a bit of a rollercoaster ride in terms of leaving my family but I know this is the best place for me and what I am doing is the best thing for me and my family.”

After joining the Future Force Foundation in February Vui starred for UWA in the Pindan Premier Grade collecting the Most Outstanding Colt Award and was a key member of the Perth Spirit’s title winning side playing all nine matches including five run-on starts.

“Being part of the Future Force was awesome, it has been such a great experience. It gave me an insight into what life as a professional rugby player is like and it really helped me understand what I had to do in order to make the step to the next level.”

“The NRC was a great stepping stone and to get a few starting games was awesome. I think that experience will definitely help me out in getting my game ready for Super Rugby.”

With his career just beginning ‘Sham’ says the chance to learn off experienced props in the Western Force squad has been invaluable and is excited for his first full season with the senior group.

“I think the thing that has helped me the most ever since I arrived in Perth has been guys like Tetera (Faulkner) and Pek (Cowan) sort of taking me under their wing and helping me improve. I can learn so much from them and they have been great from the start.”

“There is a real buzz around the place at the moment with some new coaches, a lot of new players and some club players coming through like Michael Ruru. I think all the boys are excited about what we are building towards and ready for 2017.”

Western Force Head Coach Dave Wessels says the signing of Vui is a fantastic move for the club and a fantastic endorsement of the Future Force Foundation.

“The signing of Sham is another big success for our Future Force program, which is only still in its infancy but it has already produced some great outcomes and we are very lucky to have Sham.”

“Everyone can see that he has a huge amount of potential from his performances in the NRC but more than that Sham is a very family orientated and grounded young man who is going to add a lot of value both on and off the field.

“From our perspective Sham should be attacking this pre-season as if he wants that starting position because he certainly has the capability to be a starting Super Rugby player.”