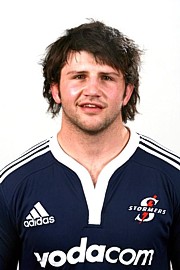 Bloemfontein – A more physical and mature Pieter Myburgh climbed off an aeroplane here on Monday to continue his rugby career at the Cheetahs.
The 25-year-old flank, who previously played for the Stormers, rubbed shoulders with some big names at the Leicester Tigers for the past year.

Cheetahs coach Naka Drotské has called on Myburgh’s services for the rest of the Super Rugby tournament after the player’s contract at Leicester recently came to an end. Myburgh will also be available for Free State in this year’s Currie Cup.

The decision to call on Myburgh came after Kabamba Floors injured knee ligaments against the Bulls on Saturday. He is the sixth Cheetahs loose forward to pick up an injury.
Myburgh said that he had to adapt quickly among stars such as Italian prop Martin Castrogiovanni, English flyhalf Toby Flood and New Zealand wing Scott Hamilton at Leicester.
“The game is a lot slower and more physical in Europe. The ball seldom goes beyond the inside centre,” he said.

“I have gained confidence and grown physically and emotionally. There are a lot of big names at Leicester and you just have to fall in. I was just another bloke from South Africa. You have to swim quickly or drown,” said Myburgh.

He said that the move to the Cheetahs had happened very quickly.

“The Cheetahs contacted me after Saturday’s game against the Bulls and now I’m here. It happened quickly,” said Myburgh.

Myburgh, who represented South Africa at under-19 level, believes he and his wife could stay beyond this year if everything goes well.
“The idea is to perhaps stay longer, but we’d like to find our feet first and then discuss the future,” he said.

The former pupil of Paul Roos Gymnasium said that he had kept an eye on the Cheetahs’ performances from England.

“I watched the game against the Crusaders. The Cheetahs are playing good rugby and I’m delighted that I’m getting the opportunity to get involved with them.”

Meanwhile, the Cheetahs got the good news on Monday that lock Wilhelm Steenkamp will only be out of action for a matter of weeks. Steenkamp, who injured cartilage in his one knee against the Rebels, visited a specialist and is expected to be sidelined for eight weeks.

There were fears that he might also have suffered ligament damage and would besidelined for months.

“It’s good news that he does not have to undergo surgery. He will probably be able to play by the second game of the Currie Cup,” said Drotské.

Floors will undergo a scan on Tuesday to determine the seriousness of his injury. Lock Izak van der Westhuizen, who missed the game against the Bulls with a groin injury, is available for Saturda’s match against the Sharks.