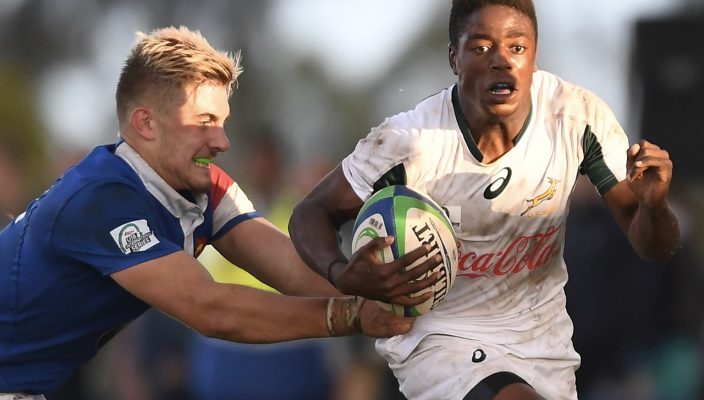 France outplayed SA Schools 28-21 at Stellenberg High School near Cape Town in an exciting match that concluded the second round of the Aon International U18 Series on Tuesday.  Both teams scored three tries during the match, but the first half effort from the French, in which they rallied up 14 points, proved crucial.

The third leg of the series will be played at SACS, Newlands on Saturday, when SA Schools face England and Wales front up to the French.

SA Schools coach, Sean Erasmus, said afterwards he was disappointed in the result, but happy with the improvements shown by the squad, which saw 11 changes to the one that managed a 43-40 win over Wales on Friday.

“We certainly showed good progress in the areas we wanted, but the result hurts,” Erasmus said.

“There are a lot of disappointed people in our group.”

The SA Schools team were trailing 14-0 at the break and 21-0 shortly after the restart, but showed good commitment and attacking prowess to score twice and had the crowd on the edge of their seats.

A third French try sealed the result but not the effort from the SA Schools, who scored again with two minutes left.

Their comeback effort ran out of time though and the French could celebrate a second win in the series.

“We had our chances in the match, but did not take those that mattered,” Erasmus said.

“We did some of the things better this time and that what it is all about. The result did disappoint ourselves and a lot of other people, but the fact that we came back strongly is pleasing.”

French fullback, Cheikh Tiberghein had a very productive day. Three of his first half penalties had the French 9-0 ahead as the SA Schools committed a number of transgressions, including a yellow card in the first half.

A late first half try by French scrumhalf, Kevin Viallard, extended the lead into a comfortable one.

The second half continued in the same vein, with winger Martin Dulon worked over in the corner to extend the lead to 21-0.

South Africa started their comeback though and tries by Evan Roos and Jacques Goosen had the lead within grasp.

Tiberghein scored a gem though, but a second by Goosen had the crowd on their feet, but to no avail.