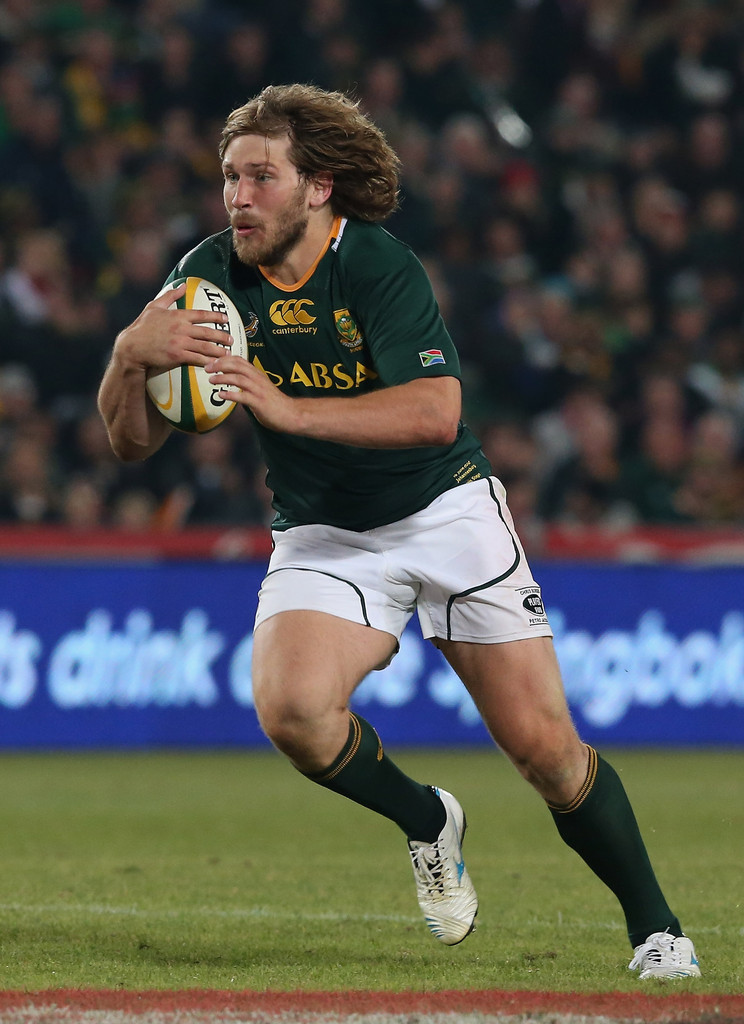 Frans Steyn will be running out in the hallowed Green-and-Gold for the 50th time this coming weekend. Photo by Getty Images.

Springbok centre Frans Steyn will on Saturday play in his 50th Test for South Africa when they take on Argentina in the opening round of The Castle Rugby Championship at DHL Newlands in Cape Town.

The 25-year-old Steyn, who made his Test debut against Ireland in 2006, will become the 23rd player to reach 50 Test caps for South Africa. He is back at inside centre after missing the third England Test in June because of his own wedding.

Apart from Steyn’s return, two Springboks who have yet to feature this year are also back. They are lock Andries Bekker and Lwazi Mvovo. Mvovo takes over from the injured JP Pietersen at right wing while Bekker replaces Juandré Kruger in the middle row for his first Test in more than two years. Keegan Daniel will start his first Test for South Africa and comes in at No 8 for the injured Pierre Spies.

In the only other changes from the team that played England in Port Elizabeth, Willem Alberts returns to flank in the place of Jacques Potgieter, who is on the bench, while Zane Kirchner is back at fullback for Gio Aplon.

In total there are five changes from the team that started in Port Elizabeth. The Springbok team has a combined total of 432 Test caps for this Test – 157 amongst the forwards and 275 for the backs.

Springbok coach Heyneke Meyer decided to stick with combinations for the Test against Argentina – the front row and loose forwards are from The Sharks, the locks play together for the DHL Stormers and the halfbacks are from the Vodacom Bulls.

“We’ve now been together for the June Tests and have had a good week to prepare, but we are still rather new as a team and it’s good that the players know each other,” said Meyer.

“Andries was always in our plans and it was a setback to lose him in June, while Lwazi has been impressive this year and I know he can fill the huge boots of JP. We’re still a young team when it comes to experience, but this is Test rugby and there is no place to hide.

“The players have been working very hard on the training field and we now need to translate that to the Test. Argentina will be fired up as they are making their debut in The Castle Rugby Championship and we know they will be a tough opponent on Saturday.”

There are two players on the bench that will be making their debut should they get game time – prop Pat Cilliers and utility back JJ Engelbrecht. Pat Lambie is also back on the bench after missing the Test in Port Elizabeth because of an ankle injury.

“We decided to go for these two because of their utility value – Pat Cilliers can scrum on both sides and JJ covers outside centre and wing, which JP Pietersen used to do for us,” said Meyer.

The Springbok team to face Argentina in Cape Town is:

· South Africa and Argentina have played against each other in 13 Test matches since 1993, with the Springboks winning all 13.

· The 13 consecutive Test victories over Argentina is a record for Springbok rugby. This record was equalled during last year’s Rugby World Cup in New Zealand when South Africa beat Wales 17-16 in Wellington for their 13th consecutive win against Wales.

· The biggest win at DHL Newlands was against Namibia in 2007 when the Springboks recorded the second highest score in South African Test rugby history, winning 105-13.

· Bryan Habana is South Africa’s most capped Springbok wing with 76 Tests in this position (he has played one Test at centre) and is also most experienced player in the squad with a total of 77 Test caps. He is the Springbok top try scorer with 40 career tries in Tests (all scored as a wing). Bryan is one of 11 players who scored two tries in a Test match against Argentina and needs two tries to equal Jaque Fourie’s Springbok record of nine career tries in The Castle Rugby Championship / Tri-Nations tournament.

· Bismarck du Plessis holds the Springbok record for most tries in Tests as a hooker – 6. He is one of nine Springboks who have scored three career tries at DHL Newlands and will play together with his older brother, Jannie du Plessis, in their record 24th Test as brothers.

· Jean de Villiers is South Africa’s most capped centre with 60 appearances in this position.

· Frans Steyn is one of only three Springboks who have scored two career drop goals at DHL Newlands and together with Naas Botha the only Springboks who achieved this in one Test match.

· Ruan Pienaar will become joint second most capped substitute (34 caps) with CJ van der Linde should he take the field on Saturday. Ollie le Roux played in 43 Tests as a substitute.