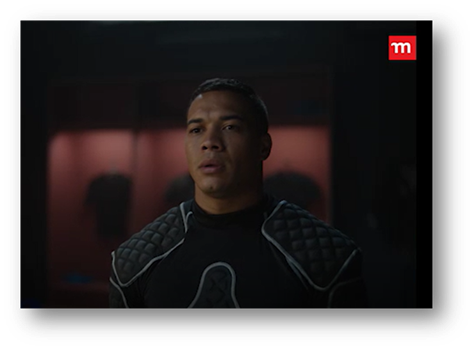 Cheslin Kolbe has had to overcome so much to become the South African hero that he is today. He grew up surrounded by crime and was considered by many to be too small to play professional rugby, let alone become an international superstar.

The new Momentum Insure television commercial that is produced by the Brave Group and partner agencies shows him seeing his younger self in the mirror while he stands before it in his rugby gear. The juxtaposition is telling of how he felt unsafe when he was young.

Gang violence was rife in Kraaifontein, where Cheslin grew up. He had some dangerous experiences as a youngster, and he followed his dad whenever he went to the training field. “Wherever he played on weekends, I always went there, stood next to the field, and obviously supported him,” says Cheslin who wanted to become a professional rugby player because of his dad. “My dad never had that opportunity because of apartheid but I saw a bigger picture.”

There was also the issue that Cheslin was smaller than the other kids his age. “I played in the streets – touch rugby, physical rugby – and we would literally go full-on at each other, with blood running and bruises.” Cheslin says, this pushed him forward despite his size and made him a stronger person. It ignited a feeling of security in his ability, to become the player that would make his younger self proud and to succeed.

It ties in with Momentum Insure’s thinking – not feeling safe keeps you static and insecure and when you feel safe, that’s when you gain the confidence and momentum to move forward. The TV commercial is important in illustrating the science of safety through Cheslin’s story – a beautiful parallel with the Momentum Insure philosophy. The two distinct stories tell of Cheslin being overlooked, not being considered good enough or eligible for international rugby. That in itself is a trigger for fear.

“Cheslin’s story is a perfect example of how feeling safe breeds confidence and confidence breeds success – and his feelings of safety ignited that confidence for his success journey.” says Momentum Insure CMO Shweshwe Tlhapane, “thanks in no small part to the feeling of safety and encouragement created for him by his family and community, and his belief and confidence in himself.”
Seeing as though Cheslin is not an actor by trade, it was important for Momentum Insure to make him feel safe and secure during the TV commercial shoot as well. Being out of his comfort zone, it was imperative that Cheslin was made to feel at ease to talk about his experiences without feeling pressured.

Cheslin’s story also resonates with the good, though. “My parents and my family, laying out the foundation for me as a young kid, definitely evolved the way I saw life and the way I was protected. And that story mirrors Momentum Insure’s way of thinking,” says Cheslin.

Momentum Insure launched their Science of Safety campaign on the 1st of July through a series of activities that highlighted the importance of feeling safe and how safety ignites confidence on your journey to success. They have recently partnered with some of SA top influencers on a series that saw them being put on a challenge to overcome their fears and how people can rise above the unsafe situations by having the Science of Safety behind them. And now embarking on a journey with Cheslin Kolbe where they are telling his true-life story through a television commercial which demonstrates how safety ignites the confidence to succeed.

The Momentum Insure brand is about allowing people to live their lives the way they want by creating a feeling of safety – when clients are feeling safe psychologically and are kept safe physically, their pursuit to success will gain momentum and their ability on the journey to get to their goals and achieve their milestones will be that much better.
“The science of safety is something that we’re extremely excited about,” says Nontokozo Madonsela, Group Chief Marketing Officer at Momentum Metropolitan Holdings.” In essence, it’s really a deep dive into behavioural science and really understanding how our clients react specifically to safety.” This critical insight has been the brain child behind the telling of Cheslin’s story and how he has been able to achieve success and move forward with momentum.