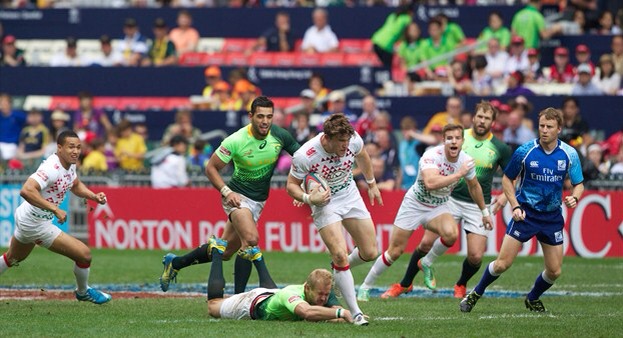 Simon Amor has named his squad for the opening round of the HSBC Sevens World Series on Australia’s Gold Coast.

Phil Burgess will captain the side with Tom Mitchell ruled out with injury, while three players are set to make their debut in Charlie Hayter, Alex Davis and Tom Bowen.

England finished fourth on the Series last season, and this year will be attempting to qualify Team GB for the Rio 2016 Olympic Games.
“We have a good balance in the squad: we have strength and pace, and some exciting playmakers pulling the strings so we’re in a good place,” said Amor.

“With the Olympics in mind, first of all it’s a huge honour to be carrying the baton for Team GB, but for us as England, it’s very much about how we can continue to improve as a team. We finished fourth last season, and our focus is quite simply on bettering that.”

Madison Hughes will captain the USA Sevens side at the opening round of the Series in Australia.

The 21-year-old scored 98 points in three rounds last season, and is joined by familiar faces Zack Test and Carlin Isles, while Peter Tiberio is named by new head coach Mike Friday for the first time since 2012.