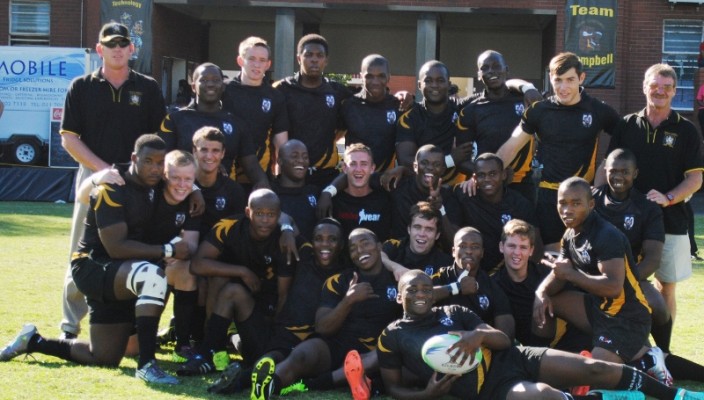 After these words from their coach, who would’ve dreamt how the drama would unfold in their final match of a 25 game season.

Glenwood had the honours of taking the kick off and exerted a tremendous amount of pressure on the boys in black and gold. Campbell however absorbed this pressure very well and remained calm which resulted in them getting a bit of forward momentum, breaking down the resolute Glenwood defences. Just inside Glenwood’s half, Campbell earned a penalty for an infringement by Glenwood forwards at the breakdown.

George Campbell’s fullback; Willie Spies; opened the scoreboard for his team by making no mistake with a well struck kick, earning his team an early 3 point lead.

At the very next kickoff Glenwood again applied pressure, this time getting a good result as Campbell were penalised for an infringement at the breakdown. The resulting kick for the corner flag provided Glenwood with a great attacking opportunity and an unstoppable rolling maul from 10 metres out saw prop Van Tonder dotting down to left of the uprights. The conversion by class act Joubert was missed by the narrowest margin, which put Glenwood 5-3 in the lead.

This seemed to be the ignition of Campbell’s attack as they too applied pressure from the kickoff and a couple of phases later they manufactured a turnover ball at which point they attacked the Glenwood 22m with vigour in their structured play, dominating the breakdowns. Campbell pressed on and found themselves inside the oppositions red zone for what must have felt like 10 minutes, forcing 2 penalties from which they could capitalise. At first they took the quick tap, but the highly alert Glenwood side defended like Trojans and kept Campbell out until they were awarded their 2nd penalty but although the decision going for the 3 pointer was the appropriate one, the conversion was missed.

From receiving the 22 kickoff Campbell tried their best to get back into the Glenwood red zone but a turnover at the ruck saw Rupert Kay using his vision by spreading the ball wide with Joubert joining the line. Silky handling and fantastic support play earned Glenwood another 5 pointer by winger “Sparks” Ngcobo linking up with a number of players in green. This time around Joubert made no mistake with the conversion kick and his team was now firmly in the lead at halftime 12-3.

It was in the second half that the drama unfolded in this exiting nail-biter. George Campbell scored an immediate try by Marco de Souza; Campbell’s no. 8; when a lack of communication resulted in Glenwood letting the ball bounce from the kickoff, the ball bounced favourably into the number 8’s hands and he dotted down just to the right of the uprights. Another eruption of elation from the Campbell crowd came about when Spies converted the try.

Now 12-10 down, Campbell certainly had their tails up and upon receiving the kickoff they attempted to maintain their dynamic attack. For a period of time the game moved up and down the field with no team giving an inch. The tenacity and physicality of attacking and defending play were top drawer. Eventually Campbell were awarded another penalty on the right hand side of the field virtually on the corner of the 10 and 15 yard lines and the decision to attempt to earn back the lead proved to be the correct one.

Spies handled the kick exceptionally well given the context of the game and he slotted the well struck ball between the uprights. At this point it seemed like all hell broke loose as the cheers from the crowd were resounding, Glenwood came back firing and Campbell held their nerve not prepared to let the lead be taken away from them.

With 10 minutes of play remaining, Glenwood launched one wave of attack after the other, but the Campbell defence remained resolute. Campbell eventually gave away a penalty in a kick-able position, unfortunately the ball hit the upright and fell into Campbell’s hand at which point they launched a counter attack through Campbell’s captain Mondli Nkosi. A well balanced run with some fancy footwork he took his team out of the red zone and got brought down just before he reached his own 10m line.

With his support arriving just too late at this breakdown, Glenwood were awarded another penalty as the referee deemed Nkosi to be holding onto the ball whilst on the ground. Glenwood’s decision to go for the line out proved to be their final attempt to clinch the game. After receiving a clean lineout ball they failed to create their devastating rolling maul as the Campbell pack decided to have the final say by stopping the green machine in its tracks. Quickly the Glenwood’s backs started to spread the ball, but the Campbell backs who seemed inspired by the defence of their pack, came of their line and tackled with determination.

This resulted in a turnover which Campbell passed out wide setting up a number of phases to bring them out to just short of their own 22 where Campbell’s scrumhalf, Deavon Koekemoer collected the ball at the base of the ruck and with a good clearance kick ended the match.

After a long season filled with ups, downs and injuries, Campbell deserve to bask in the glory of this historic victory.

After all “You are only as good as your last game”