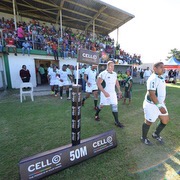 PHOTO CAPTION: Evergreens take the field for a Cell C Community Cup match last year in front of a capacity crowd at the Pacaltsdorp Sports Grounds in George. The venue will host the televised opening match of Community Cup 2015. Photo: ImageSA/SARU.

GEORGE will be the setting when two community clubs with a combined 200 years of history and tradition clash in the televised opening match of Cell C Community Cup 2015, SARU confirmed on Friday.

In what promises to be a vibrant Western Cape derby, SWD champions Evergreens, who finished eighth in the inaugural Community Cup last year, will host Boland champions United Bulk Villagers Worcester when the third edition of the national championship for non-Varsity clubs kicks off on 21 February.

The match, which will take place at the Pacaltsdorp Sports Ground in George, will be broadcast live on television on SuperSport 1 & HD (kick-off 14h30) and on radio on Eden FM (87.8-103.6 FM in the Southern Cape and worldwide on www.edenfm.co.za).

“With club rugby experiencing a renaissance, George is the perfect place to kick off the 2015 Community Cup as it’s one of our most important rugby heartlands,” said SARU CEO, Jurie Roux. “Evergreens and Villagers Worcester epitomise what the Community Cup is all about. They are true community clubs who play a vital role within their communities, while their players are local heroes and role models.

“Evergreens were founded in 1932 while Villagers Worcester, established in 1883, are one of the oldest clubs in the country and have a proud record of producing legendary national players over the past 132 years,” Roux said. “This match will showcase to a national audience just what community rugby is all about and the vital role that club rugby plays in towns across the land and especially on the platteland.”

The Evergreens vs Villagers Worcester Pool C encounter is the first of 40 group matches to be hosted at clubs across the length and breadth of the country from 21 February to 21 March, as the 20 participating sides vie for the eight Easter play-off spots on offer.

George apart, a number of other intriguing tussles are scheduled for the opening weekend in six of South Africa’s nine provinces.

SA’s oldest club, Hamiltons, bronze medallists in this year’s Community Cup, will kick off their landmark 140th anniversary season with an arduous away trip to the Northern Cape mining town of Kathu to face Aveng Moolmans Sishen in the weekend’s other Pool C match.

And in Pool D, 2013 champions GAP Management Despatch face a tough away opener in the northern Free State against Rovers Welkom, while Pumas champions Shumba Ferros and Boland qualifiers Wesbank resume their rivalry of 2014, this time in another quintessential rugby heartland – the Swartland town of Malmesbury.

The Easter play-offs, which will feature the two highest-placed teams from each Pool, will take place from 2-6 April, with the prized Gold Cup once again up for grabs on Easter Monday. All 12 Easter matches will be televised live on SuperSport.