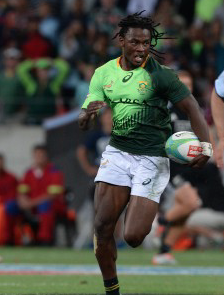 ASICS Ambassador Seabelo Senatla’s successes on the pitch over the past few years have cemented him as one of the first names on coach Neil Powell’s squad list for the HSBC Sevens World Series.

The speedy winger is well-known for his try-scoring exploits having scored the most tries during the 2014/2015 season. His 47 tries earned him a nomination for World Rugby Sevens Player of the Year and helped him to build on an already glowing reputation as one of the best wingers in Sevens rugby.

2014/2015 was a breakthrough season for the Free State born player as he was included in the Stormers’ Super Rugby Squad.

Seabelo plays in the ASICS Gel-Lethal Speed which helps him marry scintillating pace with cutting-edge footwear technology to boost his performances on the pitch for what is sure to be another landmark season.