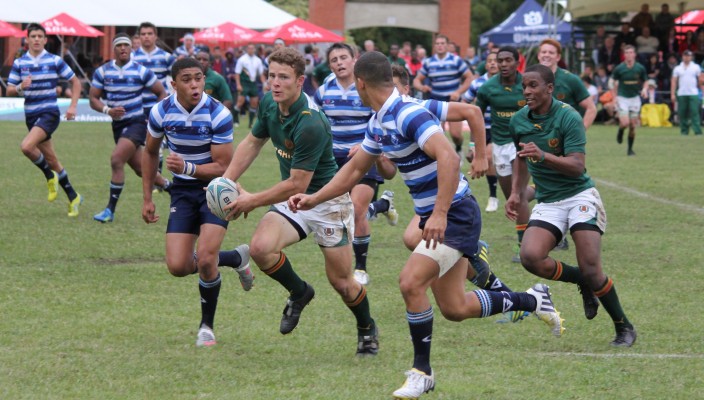 Glenwood clinched a very narrow 17 – 15 win over Paarl Boys High on Saturday, 4 May 2013 at the Wildeklawer Super Schools Tournament held at Maritzburg College.

Within the first few minutes Paarl Boys’ was penalized for scrumming up, unfortunately Glenwood fullback Corné Vermaak missed the kick.

A few minutes later Glenwood is once again awarded a penalty and Vermaak once again misses an easy kick.

Within 10 minutes of the first half a well-struck tactical kick ahead by Paarl Boys’ sees Sparks Ngcobo (11) not using his boot to find touch. The problem gets compounded when Vermaak tries to kick to the long touch and misses it badly. Paarl Boys’ uses this opportunity and scores in the corner and they convert their try putting them in the lead 0 – 7.

Glenwood continue to enjoy the better part of possession and territory but Paarl Boys’ do a good job of suffocating them with rapidly advancing defence. There are also a lot of unforced errors in the game.

Glenwood wins a penalty straight in front on the 22 after Paarl Boys’ are pinged for offside from a kick chase. Vermaak misses.

Into half time Paarl Boys’ slots over a penalty and leads 0 – 10.

Glenwood responded well after the half time break. A high tackle penalty sees Glenwood set up an attacking lineout. Glenwood go wide and Vermaak joins the line. Paarl Boys’ try to intercept the ball but Mcuma gathers the bounced ball and scores on the left side. Corné Vermaak converts the try to leave Glenwood 3 points behind.

Paarl Boys hit back after Glenwood’s half time revival and scores the side’s second try to extend the point’s gap to 8 points. This try is not converted.

Glenwood wins an offside’s penalty. They rumble it up after winning the attacking lineout and Kevin du Randt (lock) does really well to plant the ball over the line in the corner. Vermaak comes up with an excellent conversion.

Glenwood comes up with huge defence to repel several big pick and drives by the big the Paarl Boys’ forwards.

Glenwood wins a long range penalty after Paarl Boys’ infringes at the ruck while Glenwood were retreating. Vermaak who kicked well in the second half puts Glenwood into the lead kicking over a 45 metre penalty in the 55th minute, securing Glenwood’s 17 – 15 victory over Paarl Boys.