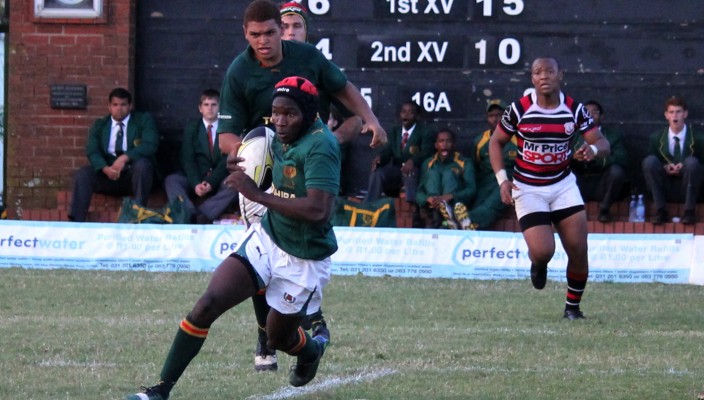 It was a battle of the big KZN schools this past weekend as Maritzburg College travelled down to Glenwood High to gain retribution for the loss against the Green Machine earlier this year.

College looked confident from the start and applied intense pressure on the rather tentative Glenwood side causing massive holes in their defence.

It was College that opened up the scoring account when craven week centre Marcel Coetzee dotted down for the visiting team.

The conversion was missed and the score was 5-0. Glenwood continued to make silly errors and a high tackle from prop Koos Tredoux gave College a penalty which was converted taking the score to 8-0. The 20th minute saw College’s lock Seko Buthelezi have a strong run in open space.

The ball was spread to fly half Hayden Tharratt who put the ball down for the second try of the match. Coetzee converted the try and College were an impressive 15-0 up.

Glenwood seemed to find rhythm in the dying moments of the 1st half and fullback Corne Vermaak managed to make an excellent run up field before sending the ball to Glenwood speedster Morne Joubert who scored Glenwood’s first points of the match.

Vermaak missed the conversion and the score at half time was 15-5 to College.

Glenwood needed early points in the 2nd half and they got these in the first 40 seconds after kick off. After a poor kick from College, Glenwood’s number 8 and man of the match Jaco Coetzee, made a fantastic 35 meter run before off-loading to Vermaak who ran in a simple try.

Vermaak converted taking the score to 12-15 and Glenwood were back in the match. With confidence building the boys in green soon started playing rugby that they are known for and some quick passing saw winger ‘Sparks’ Ncobo dot down between the poles and soon Glenwood were in the lead 19-15.

From then onwards it was Glenwood who dominated the match and in the 60th minute some deceptive play from Glenwood’s fly half Curtis Jonas created massive gaps in College’s defence and Joubert once again dotted down for his second try of the match. Vermaak converted taking the score to 26-15.

Glenwood sealed the match in the 68th minute after some good turnover work allowed for a quick counter attack allowing Ngcobo to also score his second try of the match.

Vermaak Converted leaving the final score at 33 points to 15 in the Green Machine’s favour.