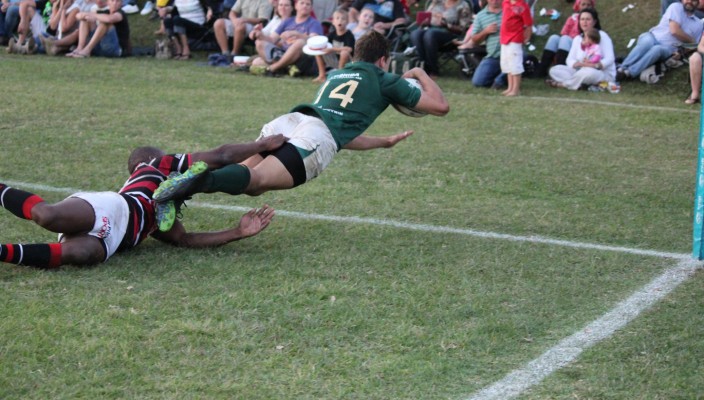 It was a day that will go down as one of the greatest games of school boy rugby ever played where Maritzburg hosted Glenwood High on their 150th Reunion day. More than 10 000 spectators packed the stands and grass banks to witness one of the most electrifying games of the year. College attacked early and were awarded a penalty in the first minute which saw the boot of College centre, Marcel Coetzee take the score go to 3-0. Glenwood’s backline were sublime on the day and College made the mistake of kicking the ball aimlessly to Glenwood’s fly half Curtis Jonas who spread the ball to winger Morné Joubert who then sent it to Fullback Corné Vermaak to score Glenwood’s first try. Vermaak failed to convert and the score was 5-3 to Glenwood. College were relentless and an impressive attack saw them take the score to 10-5. One of the major turning points came near the end of the 1st half when the College number 15 tip tackled the Glenwood centre and referee Craig Joubert had to award a red card for dangerous play. Even with 14 players on the field College did not give up and saw them take the lead after the first half 17-16.

College were awarded an early penalty in the 39th minute and took the score to 20-16 before the Glenwood backline came into play again. After failing to catch the ball in the kickoff fly half Jonas sent the ball the Glenwood’s centre AK Nela who ran through untouched to score a try. Jonas again created more space after the kick off and again sent the ball to Vermaak who at the last minute handed the ball to Glenwood’s number 13 Nkululeko Mcuma who scored under the poles. Vermaak converted and with the score being 30-20 it looked as though Glenwood were headed for a comfortable win. This was not to be and relentless pressure from College resulted in another hard worked try. The conversion was missed but an earlier penalty took the score to 30-28 in Glenwood’s favour. Another try thanks to some brilliance from Glenwood’s winger, Morne Joubert saw Glenwood take the score to 37-28 but this was short lived as the College forwards pushed over to make the score 37-35. At this stage all spectators knew that they were witnessing a humdinger of a game and with 4 minutes to go the crowd erupted as the College winger Banela Ngwenya stepped a charging Morné Joubert and created a one man overlap to allow number 8 Darren Goodsen to score in the corner giving College the lead. The atmosphere was electric and all College supporters thought the game was over and surrounded their team. The experienced Craig Joubert soon got the situation under control and after a few minutes the supporters were cleared off the field. With two minutes to go Glenwood kicked off and regained possession of the ball and got awarded a penalty. The ball was kicked into touch for one last attack. After some good work from the Glenwood forwards the ball was spread to winger Morné Joubert who with some excellence dived into the corner to score the match winner. Vermaak converted before the final whistle giving Glenwood victory with 44 points to 40.

It has to be said that College may have lost the match, but hosted an incredible day of rugby that will be remembered for years to come. 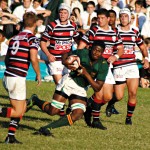 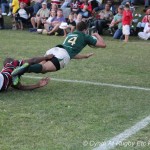