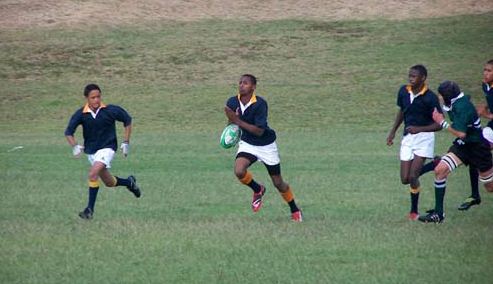 Graeme College played into the wind in the first half and scored a superb try through their eighth man, Siya Nzuzo within the first two minutes of the match. The try was converted by centre, Abongile Hashe to give the visitors an early 7-0 lead.

Grey High used the wind as well as their well-structured lineouts and mauls putting Graeme College under enormous pressure which resulted in two tries extending lead to 7-14.

Graeme College defended very well but Grey High managed to scored another two tries as since Graeme College struggled to get their hands on the ball in order to fight their way out of their own half against the wind.

Graeme College eighth man, Siya Nzuzo scored another fine try to round off a superb passage of play as Graeme College looked dangerous with ball in hand. Hashe converted and the half time score was 14-26.

The second half saw Graeme College score first through a simple but well executed blind side move which resulted in a try for wing, Xanti Sandi. Grey High struck back soon afterwards to further their lead 19-33.

In a moment of individual brilliance Graeme College captain and centre, Gordon-Wayne Plaatjes sliced through the Grey midfield defence and ran in for a try under the poles. The try was converted by Hashe to make the score to 26-33.

Graeme College again defended well and attacked with determination and purpose with the possession they did have.

Graeme College was stopped short on attack with time up on the clock and the score remained 26-33 in Grey High Schools favour.  Graeme College again showed tremendous passion and commitment.