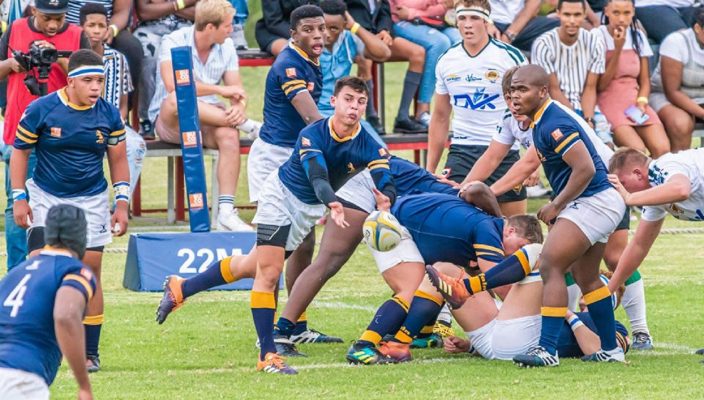 Graeme College produced a rousing finish to the 22nd Pam Golding Properties Graeme Rugby Day when they recorded a thrilling 21-18 victory over Marlow Agricultural in Grahamstown on Saturday (March 14).

In doing so, the host school overcame a 13-0 deficit against the hard-working Cradock effort, while also registering their first win over Marlow in their last three encounters.

It was a fitting finale to another excellent day of Eastern Cape schoolboy rugby which produced some interesting results, not least of all being the victories by Muir and Brandwag over Dale and Grey High respectively.

Thousands of spectators surrounded the field for the feature match and home supporters might have been forgiven if they thought a third defeat was coming when Marlow scored two tries in the first half [Ambesa Zenzile and Enric Taljaard] and added a penalty after the break.

But Graeme skipper Andrew McCallum rallied his troops and there was resilience and commitment as they gradually fought their way back into the match.

Firstly big lock Hlomla Marenene opened their scoring as he stretched over for a try and then the Graemians twice worked left wing Lelona Xhaso into space, allowing him to dart over for two tries in the corner.

Importantly, flyhalf Sakhe Kepe showed remarkable nerve and skill as he added three conversions, two of them from the touchline, to give Graeme a 21-13 cushion with just minutes remaining.

From a scrum, Marlow No 8 JO [John-Oswald] Watson broke powerfully down the right flank to score their third try, but the hooter had gone to signal a memorable win for Graeme.

After Mary Waters defeated Cambridge 33-17 in an entertaining opening game, Muir provided the first shock of the day when they edged Dale 6-5 in a hard-fought encounter.

The physical Muir side provided plenty of momentum and even though they only had two penalties by big centre Liyema Gaba to show for their efforts, they can be well pleased with their efforts against one of the Eastern Cape’s potent rugby schools.

Brandwag were delighted with their victory over Grey in a rare match-up between the two schools. The PE side took a handy 10-0 lead into halftime but Brandwag showed considerable courage as they matched their opponents’ physicality to score 17 points without reply after the break.

Grey will be disappointed with the many basic errors they made, which often stymied their efforts to build on the try by Siviwe Zondani and a penalty by Kai van Kampen.

Tries by prop Zukisa Sali and wing Corne Dawson saw Brandwag move ahead 14-10 and then flyhalf Michael Annies made sensible use of their territorial dominance at one stage to slot a fine drop goal. He also added two conversions.

St Andrew’s and Framesby became involved in a tough arm-wrestle, which was finally decided when flank Joel Vides broke through for a crucial try to give the former a 15-12 lead, which they held on to until the end.

Kingswood gave Selborne something to think about when they created two tries early on, but the East Londoners narrowed the gap to 12-7 before halftime and then powered in for three more tries after the break for a 28-12 victory.

In other victories for Border opponents over their Eastern Province rivals, an impressive Queen’s team proved too strong for Pearson to win 45-7, while Hudson Park showed good physical intent and skill to control their match against Humansdorp’s Nico Malan for a 19-12 victory.

The first team results were: