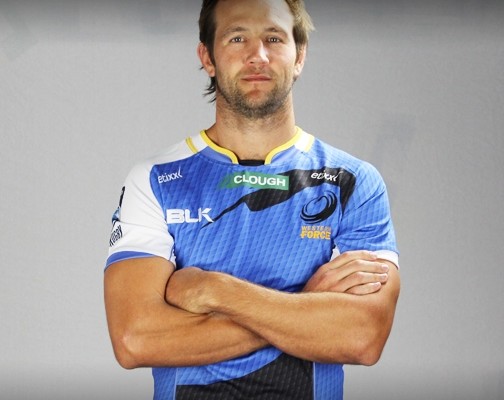 The 34-year-old made the decision to retire after receiving specialist advice from doctors in regard to past head injuries.

The decision has been an emotional one, but Grant is excited to experience rugby as a spectator and spend more time with his family.

“There is a lot of excitement because now I get to go to the games and watch it with my kids though it’s going to be a challenge. It is also going to be a big change and I am excited for that,” Grant said.

“But initially it was shock and then disappointment and uncertainty because this is all I know, and I was really getting geared up for another season. You go through the phases and there is a lot of emotion about that.”

The versatile back made his first appearance for the Force in 2016, earning his first cap against the Melbourne Rebels in Round 1 of the Super Rugby Competition and has since played over 25 games for the Force.

Grant also amassed over 880 points for the Stormers over 10 years and played five games for South Africa, debuting against Australia in 2007.

As a distinguished playmaker, he has travelled the world through his love for the sport, including playing for teams in South Africa, Japan and France and fondly reminisces on the adventures that rugby has allowed for him.

“For me, one of the highlights that comes to mind is that I’ve been able to travel with rugby and rugby has taken me to so many places and I have met some incredible people through this game,” he said.

“When you start up playing rugby in South Africa, all the Australians and the New Zealanders are your competitors, but when I got to travel I got to play with these guys.

“The characters you meet along the way and the friendships that you make, that is definitely one of the greatest highlights of all.”

But since making the move to the West, Grant has made himself a home in the state with wife, Leigh-Anne, and his three children and is looking forward to spending more time with them.

Head Coach Tim Sampson said Peter’s retirement has been upsetting for the whole team and is a great loss to the rugby community.

“The recent news was devastating for every member of the squad and staff and naturally our thoughts are with Peter and his family,” Sampson said.

“Within our programme and during games, Peter was a calming influence on those around him, so to lose someone of Peter’s experience leaves a huge void.

“Peter has contributed immensely to the Western Force during his time at the club and he will be missed.  It is never nice to see a player’s intended retirement plan taken out of their control and dictated by injury.”

On his decision to leave, Peter wanted to thank his family and friends for being a part of his rugby career, especially his wife, Leigh-Anne, his parents and his faith.

“A big thank you to my wife, she travelled with me when I left Cape Town to go to Japan and followed me to France and now when I brought her to Australia. She has been with me every step of the way and she’s been a huge pillar of strength and support for me,” Grant said.

“My faith as well, and Christ have also been a big source of support for me.

“And of course, my parents, for putting a ball in my hands and then following me from when I was a junior and watched me grow and calling me after each game to make sure I was okay.”