Great day for the Blitzbokke in Dubai 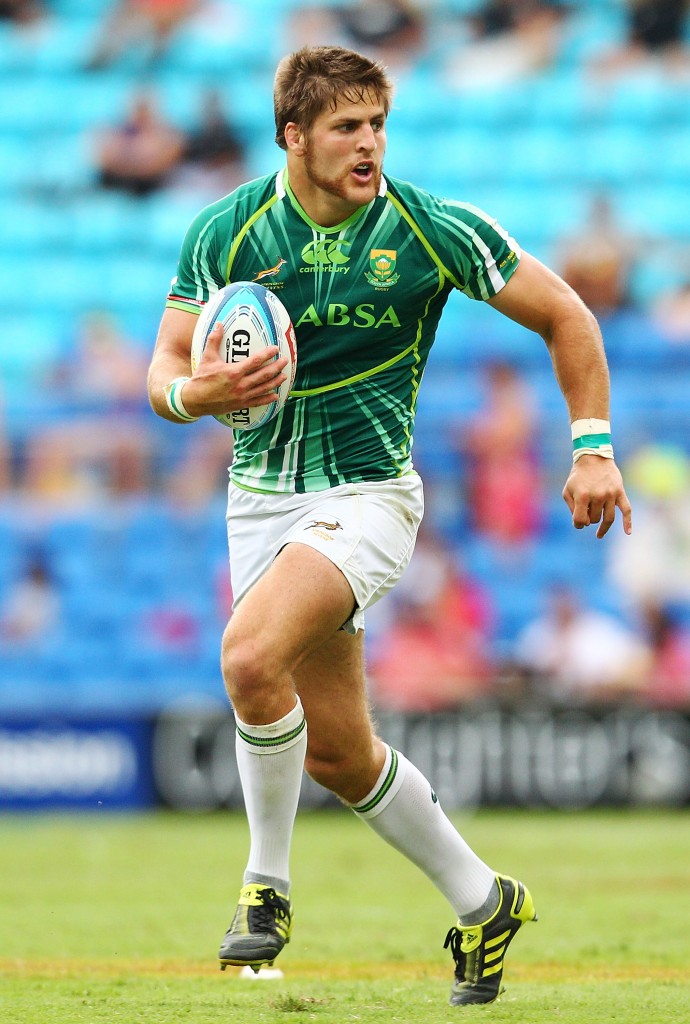 South Africa scored a morale boosting 21-5 win over New Zealand on Friday to top Pool B at the Emirates Airline Dubai Sevens and to book a quarterfinal clash against France on Saturday morning.

The Blitzbokke started impressively and dominated possession in the first half, crossing the try line twice before scoring at their third attempt when captain, Kyle Brown, fittingly dotted down after Branco du Preez and Mark Richards were both held up in the tackle.

Robert Ebersohn then took a Boom Prinsloo backhand pass to score under the post to give South Africa a well-earned 14-0 lead at the break.

DJ Forbes replied for the Kiwis after play resumed and after the impressive Frankie Horne had lost the ball going forward. South Africa coach Paul Treu then made some changes and teenager William Small-Smith, one of the replacements, took the ball at full speed on the sharp angle to burst through near the post to seal the match for the Springbok Sevens.

Scrumhalf Mark Richards had another excellent match while Horne, for so many seasons the cornerstone of the South African forwards, also had another good outing. He was strong going forward and helped the Blitzbokke to win two crucial turnovers.

South Africa, who claimed third place in the Australian tournament last week, should gain much confidence from their dominant defensive display against the powerful reigning World Series champions.

While True was understandably satisfied with especially the performance against the Kiwis, he cautioned that the unpredictable French will be formidable opposition tomorrow.

“New Zealand are formidable on attack and we needed to stick to our game plan, which I think worked very well. Branco du Preez came through well after playing for the first time in six months while Mark Richards again played a solid match. Overall, I am well pleased but it all start from scratch tomorrow against France,” said Treu

The Cup quarterfinal draw for Saturday:

The Springbok Sevens were excellent throughout both halved against a resilient USA and won their second encounter of the day quite comfortably by 36-7.

Kyle Brown scored after only 40 seconds, Branco du Preez – in for Cecil Afrika – scored his first of the season before Renfred Dazel scored his 45th World Series try to stretch the halftime lead to 17-0. Botha, Boom Prinsloo and Mark Richard added three more tries for the Blitzbokke while Peter Riberio scored a consolation touchdown for the USA.

South Africa started the day with a subdued 17-5 win over Portugal who restricted the Blitzbokke to a halftime lead of only 5-0 with Bernado Botha the only player score.

The Springbok Sevens however upped the pace in the second half and opened a comfortable 17-0 lead courtesy of tries by captain, Kyle Brown, and William Small-Smith. South Africa and 15 other international teams arrive next Sunday evening in Nelson Mandela Bay, Port Elizabeth for round three of the HSBC Sevens World Series on 9-10 December.

The first ever IRB-sanctioned Women’s Sevens event kicked off today, the IRB Women’s Sevens Challenge Cup, contested in Dubai alongside the second round of the World Series.

The South African Women lost their opening match 22-10 against the USA and then ran England close before losing an exciting match 22-19. They wiped out a deficit of 17-0 to lead 19-17 with seconds remaining before England scored the clincher. Mandisa Williams’ team ended the day on a high by beating China 28-14.